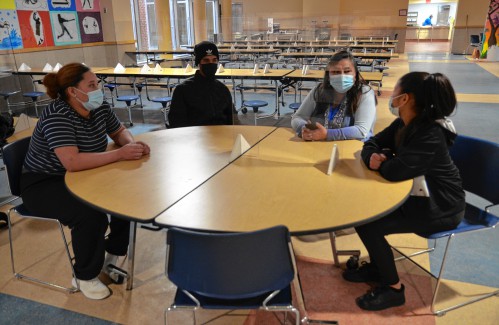 Families might know Pareja best as the voice that makes the school’s phone announcements in Spanish, but her involvement with the community runs far deeper. Pareja has spent 10 years in the district as a paraprofessional, Spanish teacher, and language liaison, serving as an integral channel between the school and those who speak English as a second language. This role as a communicator extends beyond mere translation; Pareja is a social worker of sorts, entrusted with handling disciplinary concerns and issues of family hardship as they arise in disadvantaged communities.

“The school district listens,” she said. “I am the connection.”

Long before she started working with Gill-Montague schools in 2012, Pareja was a young girl from Quito, Ecuador with big dreams. Ecuador, though, could not accommodate them.

“Oh my God, you couldn’t believe,” she said. “We couldn’t live in my country. There is so much corruption there.”

With her sights set beyond her years and her country, she fell in love at 14 before playing the long game with her heart when her heartthrob left for the United States.

“We had no contact for seven years,” she said. “That time, it was just letters. No email.”

When the time came, the reunion was sweet.

“We met again and we married in one week,” she said with a laugh, adding that December 2021 marked their 23-year anniversary.

Professionally, Pareja aspired to be an educator. She became a math teacher in Ecuador before moving permanently to Turners Falls at age 29, soon enrolling in the English as a Second Language program at Greenfield Community College.

“That was one of my dreams, just to teach here,” she recalled. “Then, I noticed all of these families that needed support.”

To some extent, the struggles of living as an immigrant and non-native English speaker came first-hand. Pareja expressed gratitude that her local community has generally made her feel welcome over the years, but that this was not the case for people of color around the time of her immigration.

“Twenty-two years ago, that was totally different,” she said. “Nowadays, people are friendly, but people treated you different because you didn’t look the same.”

Pareja also cited the language barrier as a social impediment.

“The first year was really hard because I didn’t speak English,” she said. “Everybody would say, ‘Hi!,’ and I would be like, ‘Oh my God!’”

The Gill-Montague school community has been a positive environment since she joined as a paraprofessional in 2012, Pareja said. Over her decade-long tenure that included time as a Spanish teacher before she transitioned into her role as Spanish language liaison, she has felt encouraged by how Hispanic and Latinx students who speak English as a second language are treated by their peers.

“I don’t see any difference (between how students of different ethnicities are treated) …” Pareja said. “It’s good when you are learning to speak and make more friends. That’s why I don’t see any discrimination.”

While she has not perceived great social rifts between these students and their peers, Pareja has consistently tended to situations in which she has had to be a mediator between families, doubling as a social worker. She previously completed a facilitator course that equipped her to help with disciplinary issues. Oftentimes, she said, students experience conflict with their parents due to a communicative disconnect where parents don’t fully understand their children’s lives and perspectives.

“I really like to include the families in the school district because sometimes, they don’t know what happens (at school),” she said.

Her focus in this regard centers largely around empowering the students, emphasizing to them the importance of stopping to breathe before engaging with familial adversity. She also advises parents to have empathy in recognizing that their children are teenagers who will inevitably encounter personal struggles.

“I’m teaching the kids and the parents that it’s okay for kids to correct their parents,” she said. “Just listen first. …You need to believe in your kids. Support your kids.”

Pareja also gets involved when issues arise on the level of the adults. She carries out charity work for disadvantaged Spanish-speaking populations, including delivering laptops and hotspots during the height of the COVID-19 pandemic, as well as baskets of food and other provisions at their households. She said she has continued to make deliveries once per week over the course of three months, with the deeds sometimes met with tears.

“I work all the time helping because I know how parents are having a hard time receiving the support,” she said.

Those who oversee the schools’ operations on a daily basis gushed over Pareja’s influence on the community. Superintendent Brian Beck called her “incredibly helpful to the community” as someone able to “provide support for a family who may be struggling.” Christopher Barnes, principal of Turners Falls High School and Great Falls Middle School, remarked about her “extremely open and wonderful presence that makes it easy to talk to her.”

“For our Spanish-speaking community,” he said, “she’s so wonderful in so many ways. She’s such an advocate and conduit in our school.”

As she continues playing her part in the school community, Pareja hopes to see children blossom into confident individuals who aren’t afraid to speak up when it matters. She implores parents, in turn, to support their children and encourage them to aim high as she once had.

“What do you expect in your kids?” she asked of parents. “Where do you see your kids in two years?”