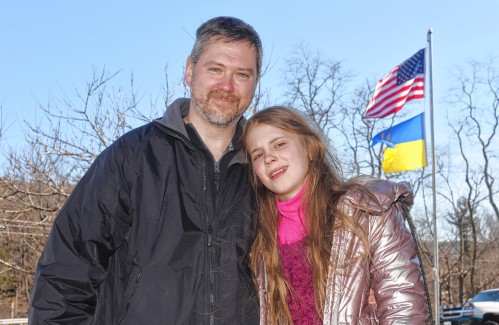 MILLERS FALLS — As Russian forces shot at her Poland-bound train, 10-year-old Kyiv native Mary Korpiewski feared that a decade of life could be all she was allowed.

Mary’s father, Millers Falls resident David Korpiewski feared the same as he navigated unfamiliar Polish streets, struggling to find the train station where his daughter would be waiting. He remained determined, though, to bring Mary home safely and away from the looming Russian invasion. His quick action, he said, is all that turned what could have been a tragedy into a success.

“It’s such a relief,” Korpiewski said Monday, just a day after their plane touched down in Boston at around midnight.

According to Korpiewski, Mary had been staying with her grandparents in Ukraine’s city of Dnipro as her mother, Iryna Bobykh, was in Vienna, Austria for a conference. Bobykh, like many Ukrainians, was skeptical of the validity of the invasion threat and had declined to send Mary out of the country. When Russia followed through and the conflict escalated into active war, Mary was forced to wait with her grandparents near a Russian-targeted nuclear power plant as her mother struggled to re-enter the country.

Meanwhile, Korpiewski, who is an associate software specialist at the University of Massachusetts Amherst, immediately engaged in a hard-fought effort to get to Poland, where Bobykh would eventually take Mary via train after picking her up from Ukraine.

One of the primary challenges he faced was that his passport was expired. With help from U.S. Sen. Ed Markey’s office, he was able to renew his passport in just a day and meet with the United States embassy in Poland to get one for Mary.

Even after he’d succeeded in enabling himself to travel, Korpiewski — who had hoped to take both his daughter and her mother back to the United States with him — said he quickly learned from the State Department that President Joe Biden’s policy of welcoming Ukrainian refugees was little more than a front. He would have to leave Bobykh, who only has Ukrainian citizenship, behind in a refugee camp, only able to take Mary with him due to the dual-citizenry she was born into.

“We’re supposed to be this country with open arms, but they aren’t taking in Ukrainians,” Korpiewski said.

Despite his efforts, Korpiewski referred to Bobykh as “the real hero of the story.” She succeeded in re-entering Ukraine and traveled through an active war zone to retrieve her daughter. Then, she and Mary crowded alongside other refugees in a train to Poland as Mary watched missiles cloud the sky.

“Her mom and her, they endured this train ride from hell,” said Korpiewski, who speaks limited Russian.

Mary said she and her mother spent 20 hours on the train after a nerve-wracking four-hour wait at the packed station in Ukraine. There were seven people per train car, some sleeping in the aisles. Along the way, they heard explosions and were shot at by Russian forces.

The two eventually arrived at a government help station and spent a day in the western Ukrainian city of Lviv before they were able to unite with Mary’s father in Poland.

“When I met her and Iryna at the train station,” Korpiewski said, “they only had the clothes on their backs. They were refugees.”

Mary said her father was able to secure the last available tickets for Sunday’s flight to the United States, a place where Mary had never been. It was a week until then, though, and the three had to stay in a Polish hotel in the interim. Here, Korpiewski witnessed the full extent of Mary’s trauma when one day, she ran to him and Bobykh “hysterically crying” after hearing a loud noise. Days later, during Mary’s conversation with the Greenfield Recorder, a plane overhead set her on edge.

“The children of this horrible war will be scarred for life, I fear,” Korpiewski wrote relative to this in a GoFundMe status update. He organized the fundraiser for travel expenses and to support Bobykh with basic necessities.

Korpiewski said even he needed “a couple days to come down from the stress high” of the situation. In spite of it all, though, he and his daughter flew safely into Boston. Now, he is working to make Mary’s transition to a new life as easy as possible, collaborating with English as a second language specialists and trying to have Mary enrolled in the Amherst school system. He added he is optimistic of Mary’s ability to “acclimate to American society,” touting her sociability and willingness to converse.

A silver lining, Korpiewski noted, is that he and Mary are now able to get to know each other better. The Millers Falls resident had only physically been with Mary for three months of her life prior to this year’s reunion. Korpiewski said that over the past few days, the two have enjoyed bonding over even the most mundane things, such as Mary’s first trip to an American grocery store. Mary added that now, she feels safe.

“It’s been good spending some quality time as father and daughter,” he said.

So far, Korpiewski has raised more than $8,000 via GoFundMe.

“I’m very impressed by the number of Americans that are helping,” he said.

He continues to accept donations at bit.ly/3u37mXp, with money benefiting Bobykh’s ability to sustain herself. He said he has sent regular payments of $1,000 to Bobykh so that she could buy food, clothes and other supplies. She will be staying at a hotel in Warsaw, where she will work on firming up her Polish semi-permanent status before transitioning to an apartment on April 1, which is also being funded by Korpiewski’s donations.

“Iryna’s best ability is to build something in Poland,” he said.

US Senate OKs daylight saving time for ever