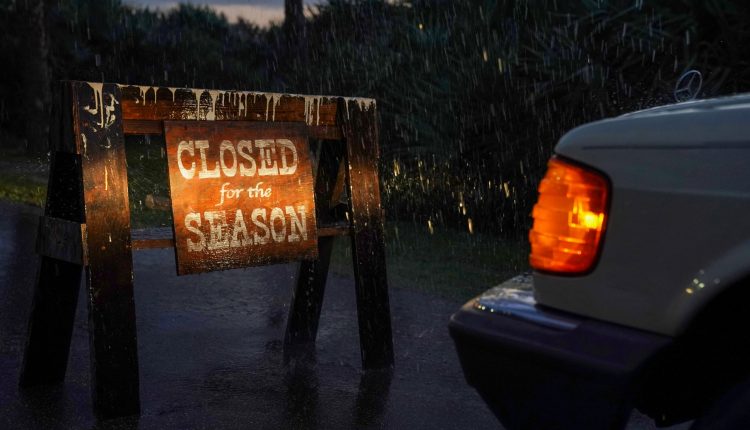 There’s an old aphorism (variously attributed to everyone from Frank Zappa to Laurie Anderson to Steve Martin) that goes, “Writing about music is like dancing about architecture.” Broadly speaking, the same might be said about horror movies. Make no mistake: plenty can be written about the finer points of the genre (I have personally spilled tens of thousands of words on the subject in these very pages). But some of the best horror works on a level that’s nearly subliminal; a masterful director can transcend a low budget, a nonsensical plot, or even outright plagiarism to create a film which will haunt your dreams for years to come. We critics can write all we want about horror, but at the end of the day good horror often defies rational description. Like magic or pornography, if it works on you, it works, and no amount of theory or ten-cent words will change that.

This is the challenge I find myself facing in reviewing Mickey Keating’s Offseason. On paper, it’s going to be tough for me to describe what sets it apart from such other recent Lovecraftian seaside chillers as The Beach House, The Rental, or The Block Island Sound. In practice, however, it just may be one of the most purely effective horror movies I’ve seen in years.

When Marie Aldrich (The House of the Devil‘s Jocelin Donahue) learns via telegram that her mother’s grave has been vandalized, she sets out with her ex-boyfriend George (Joe Swanberg) to the remote Florida island of her birth. Entering the island, the bridgekeeper (perennial supercreep Richard Brake) warns them that the whole town is closing up for the season, and that they’d better take care of their business and leave. As she makes her way to the cemetery, Marie senses that more is amiss than the tourists: the locals who remain all stare at her just a little too long, and seem to be in on a joke she can’t quite comprehend. Deciding to cut their losses before the bridge goes up, Marie and George attempt to flee. I probably don’t need to tell you that their escape attempt is thwarted, and soon Marie finds herself alone and disoriented. With no way out and no one to turn to, she begins to recall her dementia-addled mother’s final words (played in flashback by Melora Walters), and quickly realizes that the island isn’t quite what it seems. 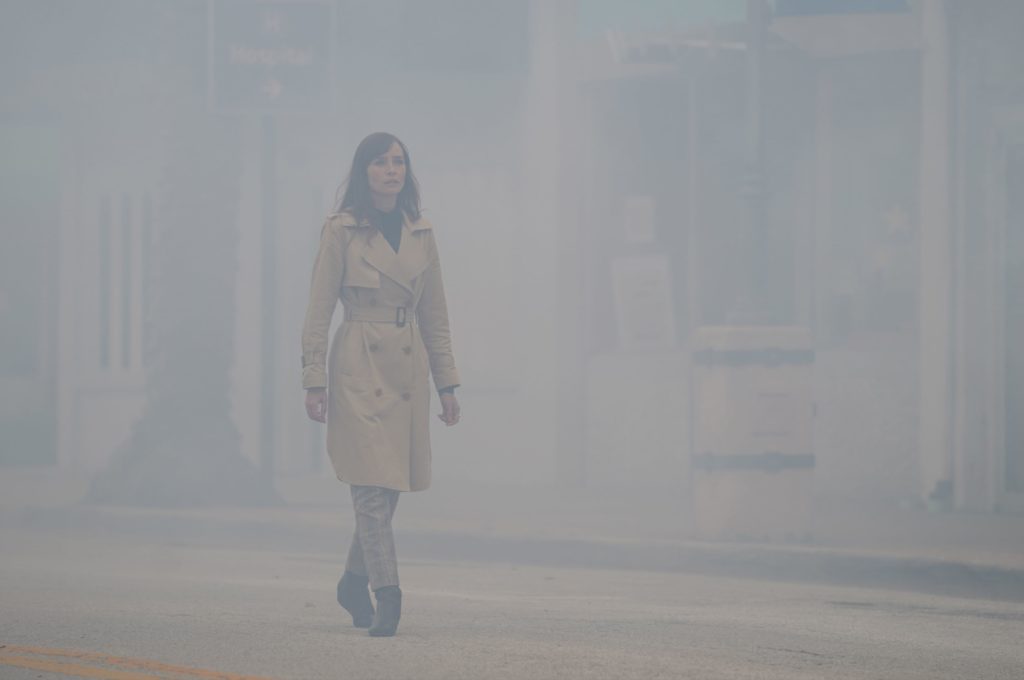 This, as I said, is all fairly simple ghost story stuff; neither the premise nor the exposition-heavy dialogue would be out of place in an episode of Are You Afraid of the Dark? But Keating uses every tool available to him to place us into Marie’s increasingly distressed headspace. Even before things take a turn for the eldritch, Keating captures the liminal spookiness of a shuttered beach town: the seemingly endless bridge, the boarded up storefronts, the locals with their own hermetic culture lurking just behind the quaint exterior. We don’t blame Marie for jumping at noises or scanning the woods for peering eyes, because how could one not be on guard in a place like this? Just as Herk Harvey did in his legendary 1962 outsider horror classic Carnival of Souls, Keating clearly started with an eminently unnerving location and spun out from there.

Of course, there’s more to Offseason than wandering around a strange village. Once things start cooking, Keating submerges you in Marie’s sense of dread with a remarkably effective audio-visual assault. The camera alternately places the audience close enough to Marie that we can only see within her eyeline, or far enough away that her isolation is on full display in fog-shrouded widescreen. The score, a mix of swirling strings and window-rattling drones, melds with the sound design, a constant thrum of echoing voices and guttural rumblings which never quite abates. The result is wonderfully off-putting and disorienting. In one standout scene, Marie stalks through an abandoned museum filled with mannequins, the loudspeaker blaring an incomprehensible loop of what’s probably pleasant, old-timey narration, but sounds like the voice of the devil itself. When things do happen, they happen hard, but the build-up is every bit as harrowing. 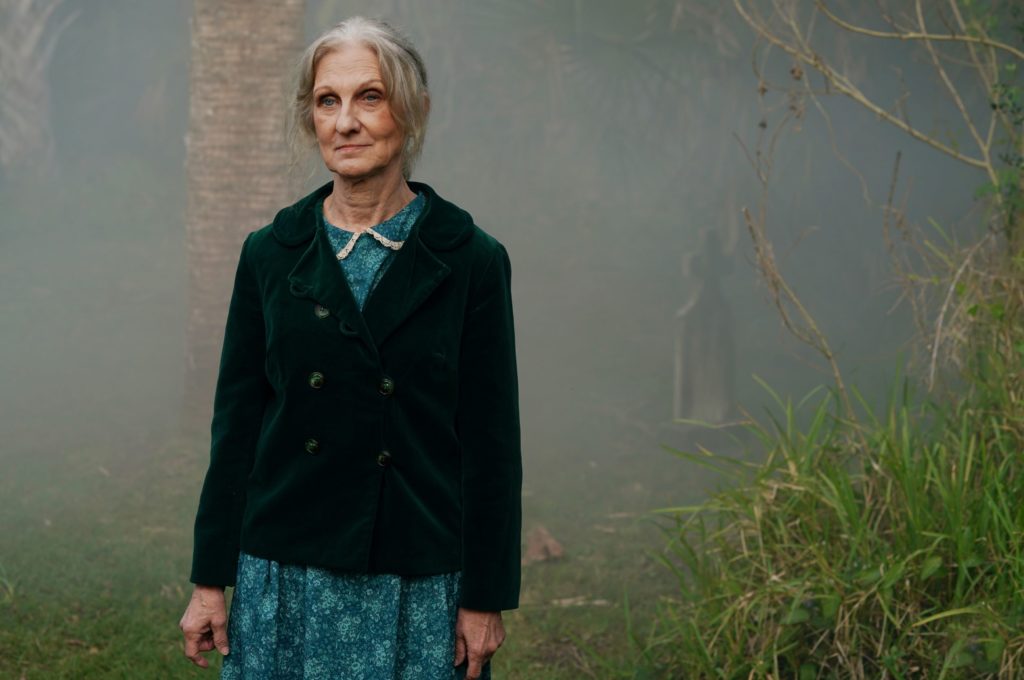 To this end, Keating could scarcely have cast a more perfect leading lady in Jocelin Donahue, whose work in House of the Devil pulls off a similar feat of tension and release. Donahue is one of the most refreshing presences in horror films today; her performances convey more soulful intelligence than the average scream queen, while sacrificing none of the vulnerability. As in House of the Devil, Donahue is here tasked with several lengthy, wordless sequences in which she walks cautiously toward what might either be sheer terror or a harmless noise; thanks to her uniquely expressive face, we know exactly how alarmed she is at any given moment. In a just world she would be one of the biggest names in the genre, and I’m always happy to see her take the lead.

Is all of this dancing about architecture? Perhaps. But as someone who watches dozens of independent horror movies every year, I can comfortably say that Offseason has that certain, undefinable something that is far from a given. I’ve seen this movie twice now (the first during last year’s all-virtual SXSW, a year ago almost to the day) and both times I was completely riveted. While it may lack some of the complexity and high-gloss prestige that’s become de riguer for the “elevated horror,” it hits all the notes it needs to hit and doesn’t overstay its welcome. It’s a genuinely scary piece of work, well-acted and -directed, which takes a relatively simple idea and knocks it out of the park. As a critic, I’m obligated to expand on my opinions, and I hope that I’ve come close to explaining what I appreciate about Offseason’s craft and artistry. But as a horror fan, my review is simply this: Offseason fucking rocks.

Art & journalism are more important now than ever. Please support The Hassle by subscribing to our Patreon.

My car requires premium gas. Can I switch to regular gas to save on high gas prices?

Korean actress Kang Soo-youn, who was set to return to film after a decade away, dies…