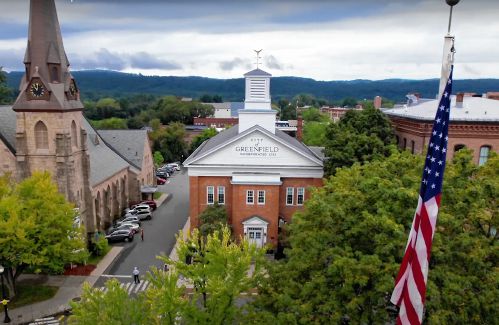 GREENFIELD — The end result of the long-awaited “Viewpoint with Dennis Quaid” short-form documentary featuring Greenfield is now available online and for the city to begin using in its marketing efforts.

“They both came out great,” said Mayor Roxann Wedegartner, referencing the two videos the city recently received from the production company. “I’m looking forward to being able to use them as part of a marketing campaign for Greenfield over the next year or so. I do think they showcase us nicely.”

The three-minute short-form documentary — which features aerial views of the city and footage of the Franklin County Fair, as well as interviews with Wedegartner, Mesa Verde owner Amy McMahon and GCET (Greenfield Community Energy and Technology) General Manager John Lunt — is viewable on the city’s YouTube page, City of Greenfield, Massachusetts, as of Wednesday. A one-minute commercial, which the mayor said has already been included in a promotional package sent out by Greenfield Community College as part of its search for a new president, has also been posted to the page. The city paid $27,900 for the project.

“It’s kind of amazing what the camera can do,” Wedegartner said, recalling the cloudy day in September when production crews were in the city. “They did a great job and got a lot of nice video.”

“Viewpoint with Dennis Quaid,” hosted by the famed actor Dennis Quaid, produces educational documentaries on subjects such as business, finance, technology, travel, agriculture, health and culture that are then shared with public television stations nationwide. Typically, the programs are aired on cable television stations, such as PBS, CNBC, CNN or Fox Business.

The production company is currently in the editing/approval stage for distribution, with airings on cable television tentatively scheduled for early summer 2022, according to Senior Producer Jordan Elliot. Follow-up inquiries regarding the distribution process were not answered as of press time on Wednesday.

“They’ll be reaching out to us as they approach the airing timeline,” she said, noting the production company has been communicative throughout the process. “As soon as they get one settled, that would outline the schedule for public television distribution.”

In June 2021, Wedegartner told City Council that Greenfield had been chosen to be in the short-form documentary program, “Viewpoint with Dennis Quaid.”

The project was the subject of controversy following Wedegartner’s decision last year to be involved with the project, which came with a $27,900 underwriting fee that was paid for using the mayor’s discretionary funds. That discontent was in part due to Wedegartner not disclosing the fee to councilors when she first presented them the project.

But Wedegartner said on Wednesday that the exposure “Viewpoint” offers was a “big piece” of her decision to look outside the city.

“There will definitely be opportunities in the future that we’ll use local video companies,” the mayor said. “The production company is a known entity to media outlets across the country. If the city of Greenfield sent them something, it may or may not see the light of day.”

Just 42 Things Your Kitchen Definitely Wants You To Buy