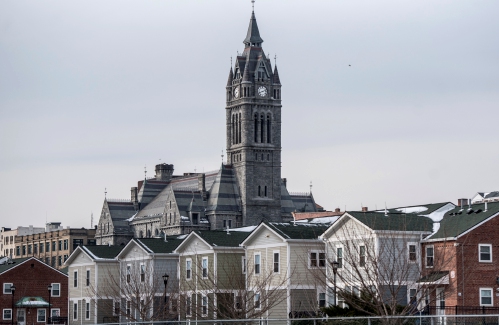 HOLYOKE — The Boston-based family education organization Families First is expanding its programming to Holyoke and Springfield, and with it hiring a local community organizer to help lead the effort.

On Wednesday, the organization announced that its western Massachusetts regional director, Jill Brevik, will be joined by Holyoke At-large City Councilor Israel Rivera, who will be serving as the Families First program manager in the region.

“In western Massachusetts this is something that’s going to add value to our community, that’s very very needed,” Rivera said. “Ultimately, it provides the space to come together as parents and actually share and learn together among each other’s experience.”

Earlier this year, after his election to the City Council, there was intense focus on Rivera’s employment with the Holyoke Public Schools. That’s because a city ordinance bars city employees from simultaneously serving as a councilor. Some councilors tried to change that rule, but ultimately failed and Rivera had to quit his job in order to keep his historic victory as one of just a few Latino candidates ever elected to an at-large seat on the City Council.

A parent of three, Rivera said that his personal and professional experience will serve him well at Families First, which he said delivers evidence-informed education on parenting from birth to eight years old.

“It’s a big step for us as an organization, it’s a region that we’ve been excited to explore for a long time,” Brevik said.

Families First’s programming features 12 parenting education and support sessions, after which parents can take part in a paid leadership program and then do community projects with the organization. Those sessions range in focus, from how to use play as learning to how to develop positive discipline strategies. Another topic of focus is stress management, Brevik said – an important topic for parents, particularly during the COVID-19 pandemic. Three of the sessions are led by parents, who discuss the challenges they are facing together as a group.

“These parents are building support systems with each other,” Brevik said.

Brevik added that the organization doesn’t work independently, but rather operates on a partnership-based model and is looking for other organizations — child care facilities or schools, for example — who might be interested in learning more.

As public and private employers across the country struggle to retain staff, Holyoke Public Schools have become the latest to offer retention bonuses to staff in an effort to keep them in the district.

On Wednesday, the district’s Receiver-Superintendent Anthony Soto announced that the bonuses are a way to retain staff who have “stuck with the district throughout the COVID-19 pandemic.” Staff would have until May 26 to sign a declaration of intent to return to the district for the coming school year. The amounts of the bonuses would be based on length of service in the district “and other factors.”

“We know our collective path forward requires stability and continuity. It requires us all to be here — next week, next month, next year — doing what we each do best,” Soto said in an email to staff.  “And while my thanks to all of you are truly heartfelt, I also know that tangible demonstrations of appreciation are also important.”

Staffing retention problems continue to plague Holyoke Public Schools, which have been under state control since 2015. Under state “receivership,” as it is known, a frequent criticism has been the district’s failure to keep teachers and other staff in Holyoke.

State data show that the district’s teacher retention rate was 77.3% in 2021 and 74.7% this year — below the state’s 90.6% average in 2021 and 89.8% this year. Only 50 of the state’s 400 school districts had worse teacher retention numbers than Holyoke in 2021, and 42 of those 50 were charter schools, where teachers unions for the most part don’t exist. Under the state’s receivership law, the state has broader power to open and renegotiate contracts with teachers unions.

In its announcement, the district said that the bonuses were a recognition of staff’s commitment, an incentive for them to stay with Holyoke Public Schools and a way for the district to remain “fiscally competitive with other school districts and other private sector businesses.”

Ever since the early days of the COVID-19 pandemic, the state has funded a widely popular drive-through testing site at Holyoke Community College. But that’s soon to end.

Earlier this month, the state announced that it is concluding its “Stop the Spread” testing program at HCC “due to rapid decline in infection rates and dwindling demand for COVID-19 tests.” The final day of testing at HCC will take place on March 31.

The HCC site is one of 30 such PCR testing sites the state is closing statewide out of a total of 41.

Other testing sites not sponsored by the state will still continue to operate, such as locations at the Holyoke Mall and at Millside Park in Easthampton.