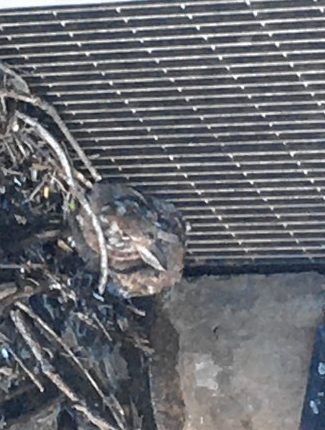 ORANGE — It appears the Easter Bunny will be all right to make home deliveries next month, thanks to a save by the Orange Fire Department.

Officer-in-Charge James Hopkins said his department rescued a wild rabbit from the debris collection grate before the South Main Street dam on the Millers River on Wednesday afternoon. He explained a woman and young girl walking a dog noticed the rabbit in trouble at roughly 4:50 p.m. and walked across Memorial Park to the Fire Station at 18 Water St. to inform firefighters.

According to Hopkins, the department deployed a ladder truck and extended its aerial ladder so Hopkins could get to the dam’s catwalk, climb down another ladder and grab the rabbit with a catching net, ending a one-hour operation.

Wild rabbits have a reputation for being nippy, but Hopkins said this particular bunny was utterly exhausted. He said it likely fell into the river and floated downstream to the debris collection grate.

The rabbit was handed off to Janelle Caron, with Athol-based North Quabbin Regional Animal Control. Hopkins said the rabbit was then taken to a rehabilitator in Hubbardston to dry off and warm up overnight. It will receive X-rays on Thursday to determine when it can be released back into the wild.

The officer-in-charge said he is pleased his crew could rescue the rabbit because the young girl who helped report it was quite worried.

“She was pretty upset about it,” Hopkins said.

According to the Orange Fire Department’s Facebook page, Hopkins was assisted by firefighters Brian Boucher and Daniel Emerson. The Orange Police Department was also on scene.