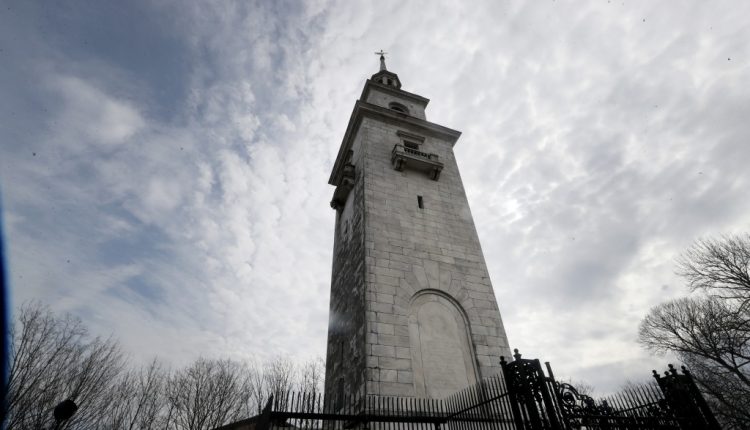 Mark March 17, 2026, on your calendars, because the 250th anniversary of Evacuation Day in Boston is slated for a big celebration, with a $25 million overhaul of the monument at Dorchester Heights and a striking art project both planned with an eye on the semiquincentennial.

“The project will include the full restoration of the 1902 commemorative marble tower behind me and the surrounding landscape to its former grandeur, allowing visitors to experience this historic place for generations to come,” said Gay Vietzke, the northeast regional supervisor of the National Park Service, standing in front of the tower on Telegraph Hill on Thursday, Evacuation Day.

The design could wrap up as soon as this fall, with the work itself work taking 18 months to overhaul the top floors of the tower and the surrounding park.

Vietzke said the work include taking apart and reassembling the top floors, placing granite slabs to mark where the 1776 fortifications sat, bringing the retaining walls, drainage and lighting up to date and giving the info panels a face lift.

The announcement of the money, which comes from the Great American Outdoors Act of 2020, came on the 246th Evacuation Day, the commemoration of the morning of March 17, 1776, when the blockading British fleet awoke to find that they were staring down the barrels of a George Washington-led artillery battery that had crept its way up onto the Heights — and quickly high-tailed it out of there.

This broke an 11-month blockade of the city in an important early moment in the Revolutionary War.

This isn’t the only event planned with an eye on 2026.

Artist Michael Dowling of SPOKE, an arts organization that in the past has focused on South Boston, HIV and drug addiction, said his organization is looking for 100,000 people — that’s about one in seven people who live in the city limits — to contribute to a project by writing “a short story of belonging” on a piece of cloth. The organization is planning to tie all the pieces together in a four-mile-long rope, the length of the last slog the Washington-led troops had to haul the cannons in secret from what’s now Fort Hill in Roxbury to the Heights in Southie.

“We all have a voice in this place we call home,” Dowling said.

In This World, Everyone's Either Taylor Swift Or Adele, So Eat Some Cupcakes To Find Your Match