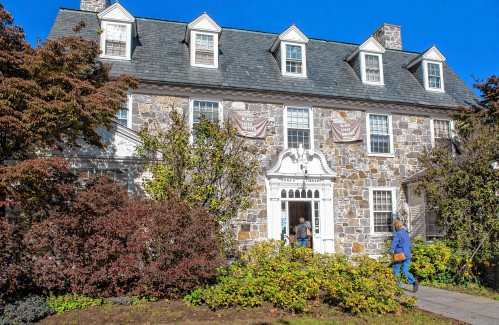 AMHERST — On the Same Page, the community reading program put on by the Jones Library, is marking its 10th year with programs centered on “How to Make a Slave and Other Essays” by author Jerald Walker.

The book, which focuses on how a Black professor at a mostly white liberal arts college in Massachusetts experiences and confront racism at work and in the community, was a finalist for the 2020 National Book Award and won the 2020 Massachusetts Book Award for Nonfiction.

Elements of the program being put on this month aim to enrich the reading experience and encourage dialogue about the book’s themes, according to Janet Ryan, the library’s head of programming and outreach.

A a book discussion will be led by Jimmy Worthy, assistant professor of English at the University of Massachusetts, on March 28 at 7 p.m. via Zoom, hosted by librarian Linda Wentworth. Three days later, at the same time and also via Zoom, the author, Walker, will lead another virtual discussion of his book.

Earlier this month, the library held a talk by Alan Goodman, professor of biological anthropology at Hampshire College, reflecting on the myth of biological race and how human variation is neither described nor explained by the idea of race.

For more information and to register for programs, go to joneslibrary.org/onthesamepage. The program is supported by Friends of the Jones Libraries.

New businesses recently came before the Design Review Board to get approval for signs and exterior treatments of the buildings that will house them.

At 51 North Pleasant St., the Amherst Oyster Bar restaurant will replace mainstay Judie’s Restaurant, which opened in 1977, closed at the onset of the COVID-19 pandemic and never reopened. The exterior for the new restaurant will be mostly blue with maize accents, with maize also used on the light covers.

Coronation Cafe is coming to 103 North Pleasant St., a spot long known as the home to Bart’s, though most recently used as the site of Powerhouse Nutrition restaurant.

Its signs will read “naturally health cuisine” and “served with a heart of welcome,” as well as listing some of its menu items, such as omelets, parfaits, salads and smoothies.

An online petition has been launched by UMass Students for Animal Liberation that asks Chancellor Kumble Subbaswamy to end animal research on campus.

The petition is the latest action over the use of marmosets in menopause research, following protests on and off campus, advertisements run by People for the Ethical Treatment of Animals, and the badgering of UMass President Marty Meehan at a recent alumni function in Florida.

PETA is asking UMass trustees to intervene in an effort to meet with Meehan about the research. “Marty Meehan pledged to meet to discuss the scientifically flawed experiments that blight UMass’ reputation, and now he’s broken his promise,” PETA Senior Vice President Kathy Guillermo said in a statement.

The student-led petition against primate research is at https://chng.it/GJQ4Nyqzd5

The Conservation Commission is in the midst of trying to solve an issue on properties near the cul-de-sac where Kingman Road and Tuckerman Lane meet, after a stand of trees was removed to make way for two homes, in violation of the state’s Wetland Protection Act and the town’s Local Wetland Bylaw, according to officials.

The commission recently received a request for determination related to the work done within the 100-foot buffer to a bordering vegetated wetland and an intermittent stream by Luis Builders of South Hadley.

Chairwoman Jenn Fair explained that the tree-clearing is a concern due to the proximity to a wetlands resource area.

Neighbors said the tree clearing has caused erosion and was done without their being informed, and that there has been a loss of buffer to the railroad tracks.

Dan Luis of Luis Builders is working with Erica Larner of Larner Consulting to address the slope, drainage and plantings, and will return to meeting on March 23 with an action plan after tensions arose over whether the commission should have issued an enforcement order.

The event will take place via Zoom. Go to amherstma.zoom.us/j/524601364 to participate.