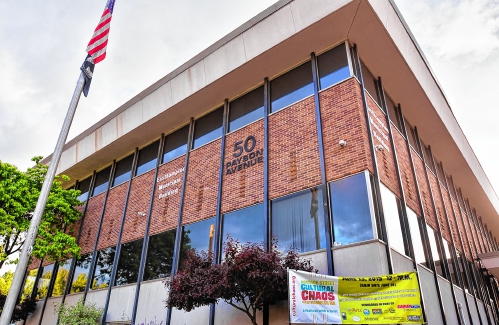 Over the course of several months, the board held three public hearings and sought input from local businesses and the public around the application and licensing process. After consulting with Ralph Sacramone, executive director of the state Alcoholic Beverages Control Commission, and collaborating with the public as well as the city’s solicitor Mark Tanner, the board voted to implement the new license for all outdoor live entertainment events.

This is the first time the city has created a requirement to have an outdoor live entertainment license, according to Lindsi Mailler, municipal clerk for the board.

“It was discussed amongst board members for a while to help mitigate noise complaints and event complaints,” Mailler wrote in an emailed response. “Because the city does not have a noise ordinance and we did not have a licensing process in place for events, there was no way for the licensing board to oversee the issues.”

She said the board agreed the best way to move forward with the process was to hold public hearings rather than implement it on its own, which the board could have done, according to state law.

During the last public hearing on Jan. 12, founder and manager of New City Brewery Sam Dibble said he felt the process had been rushed. He told board members at the Zoom meeting that the application could have “far-reaching consequences” for businesses like his brewery and musicians in town. Dibble, who said that his business had shifted his musical entertainment outside as a result of the pandemic, requested another opportunity to appropriately voice his concerns and suggested a description of volume be added.

Mailler said at the meeting that volumes could not be deliberated.

Kelly Richey, chairperson of the board, asserted that the discussion was a result of a series of complaints about Dibble’s business.

“This is what has started all of this,” Richey said. “And this is what we’re trying to not have in the future. If you had a one-day permit to do outside entertainment — there could have been a mechanism in place to say, ‘Could you turn the music down, because people hear it across the pond in their living rooms or their kids are trying to sleep.’”

After a somewhat heated back and forth, Dibble stated that he felt the application as written was flawed, but thanked the board for time to speak.

Richey noted that it was within the board’s purview to look at each application and critique it based on an individual basis. She said that it wasn’t necessarily important to collect as much money as possible but rather to be able to regulate the timeframes at which the music would be played.

At the close of the third public hearing, the board voted to implement the application and licensing process.

More recently, the board reviewed the final application proposal that Mailler had created and asked that it include good neighbor language, requesting that those that apply “make a commitment to being a responsible neighbor in the community.”

The good neighbor language reads, “Out of consideration for others in the community, the emission of any unreasonably loud, disturbing, and unnecessary noise that disturbs the peace and quiet of the community or an individual is prohibited. Outdoor Live Entertainment licenses are a beneficial resolution for remedying disputes and moving forward with future applications. Applicants should be mindful to monitor/control the behavior of attendees so that the program, event or activity complies with the approved license at all times.”

The board recommends that the group contact the licensing board at least one month in advance of the scheduled event. A completed application must be filed by noon two weeks prior to a scheduled hearing, which is held once per month. Applications are available at https://bit.ly/3CSKIW4.