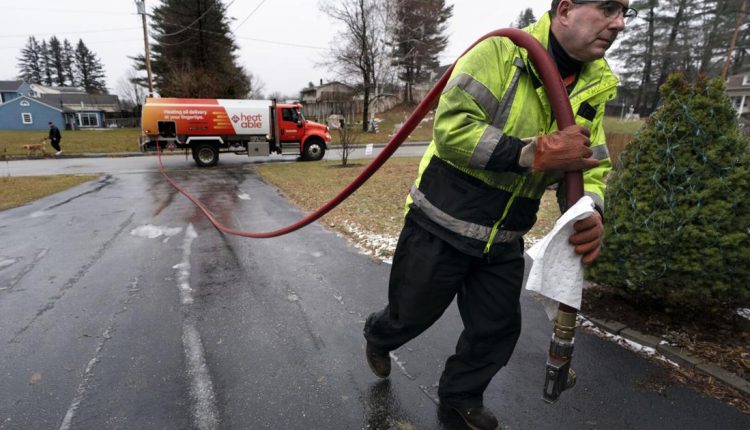 BOSTON — Home heating oil prices have skyrocketed following Russia’s invasion of Ukraine, putting a squeeze on consumers in the final months of winter.

The state Department of Energy Resources, which conducts weekly surveys of fuel service oil dealers, says the price of home heating oil was averaging $5.01 a gallon this week. Prices range from $4.40 to $6.10 per gallon across the state.

That’s a nearly $1 per gallon increase over the past week, a roughly 74% increase over last year, when it was averaging $2.89 a gallon, according to the agency.

It’s also slightly higher than the national average of $4.92, which was up 87 cents per gallon over the previous week, according to federal energy data.

Consumer advocates say Massachusetts already has some of the highest energy costs in the nation, and the spike in heating oil prices will have a particular impact on low-income households that already have trouble making ends meet.

“This is one of the biggest increases we’ve seen,” said Charlie Harak, senior attorney for energy and utility issues at the Boston-based National Consumer Law Center, which compiles data on energy bills. “I can’t remember a time when we’ve had an increase that has happened so quickly and by this much.”

He said at current prices, filling up an average tank of home heating oil would cost an estimated $1,380, compared to about $800 last winter.

Making matters worse, many low-income families have run out of fuel assistance benefits as the bills for filling up a tank are set to more than double, he said.

The average fuel assistance aid this year was about $1,600, which in a normal winter is enough to cover 60% to 80% of a family’s home heating bills.

Meanwhile, the number of households that aren’t considered low-income but are behind on their utility bills by 90 days increased risen during the pandemic.

Harak said people who are behind on their bills have had protections for the past year from public health orders that forbid utility shut-offs. There’s also a seasonal moratorium in Massachusetts on disconnecting services for failure to pay.

“But at some point the utilities are going to have to start collecting on those bills and if they don’t get paid they’re going have to turn people off,” Harak said.

Industry groups say energy costs are being driven up largely by the Russian invasion of Ukraine, which caused rippling effects on oil markets across the world.

“The Ukraine crisis has driven the prices to unprecedented levels,” said Michael Ferrante, president of the Massachusetts Energy Marketers Association.

He said prices for natural gas, oil and diesel fuel were rising even before Russia’s invasion, driven by increased demand as more people returned to work.

But the conflict has created chaos in the global oil markets, and home heating oil dealers are seeing price fluctuations three or four times a day in some cases.

“When that happens, the suppliers immediately have to pass that cost onto the retailers who deliver fuel to peoples’ homes,” Ferrante said. “And of course that trickles down to consumers.”

“They dislike the a higher prices as much as consumers do, but they have to pass them along,” he said.

Massachusetts is the third-largest consumer of home heating oil in the nation, with an estimated 700,000 homes using about 850 million gallons a year, according to industry figures.

In a letter to Health and Human Services Xavier Becerra, U.S. Rep. Katherine Clark, D-Melrose — who serves as assistant House speaker — led nearly 90 other lawmakers in calling on the administration to “take additional steps to reduce energy costs” including the release of more federal fuel assistance money.

“LIHEAP plays a critical role in offsetting burdensome heating and cooling costs that strain the budgets of financially vulnerable Americans,” the lawmakers wrote. “But as prices skyrocket because of Russia’s aggression in Europe, states will have to make tough choices about the number of people they serve and the amount of LIHEAP assistance they can provide to each household.”

This Iced Coffee Quiz Will Guess Your Exact Age