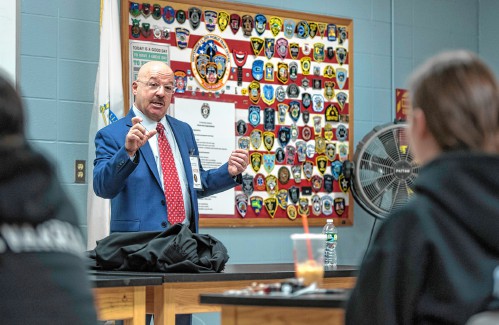 NORTHAMPTON — Representatives of the state judiciary system visited criminal justice students at Smith Vocational and Agricultural High School on Friday morning to share career advice and encourage them to consider lives of public service in the courts.

Massachusetts Superior Court Associate Justice Mark Mason — who sits in Springfield, Northampton, Greenfield and Pittsfield — has served on the bench for 13 years, following a 24-year career as a lawyer in private practice. He chairs the committee responsible for the Superior Court’s community outreach efforts.

“We’re here today to inspire these students as to potential career pathways in the judicial branch of government,” Mason told the Gazette before entering the classroom wearing his black judge’s robe. When he walked in, Assistant Chief Court Officer Mark Skora called out, “All rise!” and all 17 students stood up.

“As much as some people like to think that people are rising for the judge himself or herself, you don’t stand for me,” Mason told the class. “You’re standing for what I stand for, because when I put on these black robes, what I stand for is justice. We’re standing out of respect for the rule of law.”

National Judicial Outreach Week, an initiative of the American Bar Association since 2017, is observed each March with the theme “Preserving the Rule of Law.” The Massachusetts Trial Court expanded the program to a full month in 2019.

Seventy-five judges were scheduled to take part in events at schools, colleges, public libraries and senior centers throughout the state this month, including in Greenfield, South Deerfield, Monson, Chicopee and Orange.

Students also heard from Skora and Probation Officer Sean MacDonald, both of the Northampton courts, about their respective roles in the judiciary. All three live in Hampshire County.

“Fundamentally, what we all share with you is that we want to help people,” Mason said. “We handle some of the most important problems and disputes that people get involved in … and that’s why the work that we do can be so gratifying to you as you choose a career path.”

Once a premed student who couldn’t stand the sight of blood, Mason said he had no idea what he wanted to do for a career. He studied psychology in college and said he had “never even met a judge” before attending law school.

“Growing up, I wasn’t even thinking of being a lawyer. My grandmother used to tell me these were the hands of a physician,” Mason said, but “as a kid, I always had a real strong sense of justice. I wanted to make sure that people were treated fairly.”

Nyhasia Hall, a senior criminal justice student planning to go to Greenfield Community College, said she “always wanted” to be a court officer for a similar reason. She told the Gazette she had seen “unfairness” in the justice system and she wanted to be part of the solution.

“I don’t like anybody being picked on,” Hall said.

She also likes the idea of protecting and assisting judges while doing a job that’s not “too much.” Still, she is not sold on a particular career path and may become a paramedic or firefighter instead.

Some classmates told the visiting court officials that they wanted to join the military, enter law enforcement or become probation officers or firefighters, as well.

Skora, a veteran of the U.S. Air Force, said his job is complex and includes the responsibilities of first responder, security guard and jailer. He said he worked as a corrections officer after college and then decided to become a court officer to ensure he wouldn’t have to work nights.

“You have to be a people person” to have a career in the judiciary, Skora said. “People come to court because there’s an issue, there’s a problem in their life. They come to court to solve it. … We have to make sure that everyone in that task is safe.”

Salaries for a court officer top out at around $91,000 per year, while a chief probation officer can make up to $145,000 and a judge can earn $185,000, the three presenters said. Qualifications are different for each position, but Skora said court officers need to be versatile and ready for anything.

“It’s funny how young, strong people, when they get taken into custody, they started having a heart attack. Everyone starts having a heart attack,” Skora said to laughter. “We have to take that serious. … It’s usually a panic attack, but you never know, so we have to go through the gauntlet.”

Mason said court officers have protected him and others in the wake of bomb scares and death threats, even though the only weapon they carry is mace.

MacDonald, a 25-year veteran probation officer and a former youth league basketball coach in Northampton, showed students the GPS ankle monitor, breathalyzer and drug sample test cup that are standard tools in the field. He said the “ultimate goal is reducing recidivism,” not additional punishment.

“We’re not here to send them away. We’re here to work with them,” MacDonald said.

He went to college to become a teacher, but like “my entire family, aunts, uncles, my parents,” he said he felt a pull toward the court system. He became a social worker for the state and quickly decided on his current career.

“Being a probation officer is fantastic,” MacDonald said. “I love my job and I wouldn’t want to do anything else.”

Mason told the students that he had to leave at 9:30 a.m. to return to Hampden Superior Court, where he is presiding over a trial. Next month, the criminal justice students are planning to tour the Northampton courthouse, where Mason will be sitting, and they may hold a mock trial there.

This Iced Coffee Quiz Will Guess Your Exact Age