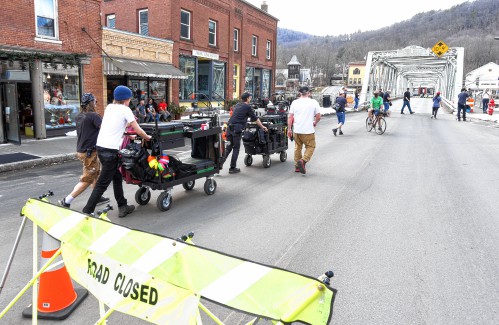 SHELBURNE FALLS — Despite the first 70-degree day of the year, it was holiday season in the village once again as production crews unraveled faux snow and unpacked cameras Friday in preparation to film “The Holdovers.”

Onlookers in the village are just about as experienced in the movie-making business as the camera crews, as “The Holdovers” marks the fourth film or TV show filmed in the last decade in Shelburne Falls. Residents and business owners welcome movie crews, but were especially thankful that crews were only going to be in town for one day when other productions like “Dexter: New Blood” lasted for weeks.

Produced by Honest Scholars Production LLC and Miramax, “The Holdovers” is a comedic drama starring Paul Giamatti as Paul Hunham, a professor disliked by his students, fellow faculty and the head of school at a prestigious New England academy. Hunham befriends Angus, a 15-year-old student, and the school’s cook Mary, a Black woman who just lost her son in the Vietnam War, as they spend two weeks of winter break at the academy learning how to understand one another and forge a better life, according to a synopsis provided by Miramax.

Disruptions were limited for “The Holdovers,” which only filmed on the Shelburne side of the Iron Bridge. The bridge was closed from 2 to 11 p.m. on Friday and several parking bans were in effect on the spots closest to the bridge, but businesses were allowed to operate as usual and passersby were allowed to walk the sidewalks as long as filming was not in progress.

Bragdon was sitting at a table on the sidewalk with Edith Bingham and their three grandchildren, who they brought to show them how movies are produced. Juniper Totino, their 10-year-old granddaughter, said she was excited to see the filming of “The Holdovers” after seeing “Dexter: New Blood” be filmed in the village last year.

“I think it’s cool,” Juniper said, who added she likes watching how movies are made, but isn’t interested in the industry herself. “The person filming (‘Dexter’) showed us what they got last year.”

Bingham said they were excited to watch “The Holdovers” when it comes out, especially because it’s a little easier on the stomach compared to the violence seen in “Dexter,” which centers around a fictional serial killer.

“I can’t wait,” Bingham said. “We really liked ‘The Judge’ and ‘Labor Day,’ but ‘Dexter’ was a little too gruesome.”

Businesses usually see some extra income when film crews are in town — “Dexter” crews spent around $900,000 in their time filming, according to Buckland and Shelburne officials — but Bragdon said his bed and breakfast sees a unique boost, as crews don’t often stay there, but production scouts and tourists who visit where movies are filmed will often stay there.

“A whole family came from Argentina to see where ‘The Judge’ was filmed,” he said.

Shelburne Falls resident Deborah Diamond was joined by other onlookers while sitting at a picnic table watching crews prepare for scenes on Bridge Street. She said movie crews are often a “very positive” experience, but she was glad that the village was only going to be affected for a single day.

“One day is great, everyone’s been really nice,” she said, adding that “Dexter” was “way more restrictive.”

“This seems a lot more manageable,” she said.

Diamond said it’s fun to watch the movies filmed in the village to see what parts they recognize, even though there is always a little bit of frustration that comes from traffic being detoured and the usual closure of the Iron Bridge.

Bob Fisher, an Ashfield resident and the owner of the Trolley Stop antique store, agreed with other villagers that the disruption from “The Holdovers” is “nothing compared” to other productions in the village. He said the crew has been “real nice” and businesses are compensated for their time, which is an added bonus because business has been difficult between the pandemic, the filming of “Dexter” and last summer’s Bridge Street reconstruction project.

“The Holdovers” was also filmed at Deerfield Academy over the last week, in what school Director of Communications Jessica Day said was a “great” experience.

“They were here, the big day was Tuesday,” Day said on Friday, adding there were all sorts of extras on set with vintage cars filling the school’s parking lot. “Everything was great. They wrapped last night around 9:30.”

She said the crews were “really organized” and were able to get everything they needed before students return from spring break on Sunday.

“It was a totally positive experience, absolutely,” Day said. “They kept to the schedule they said they would. It’s almost like it never happened.”