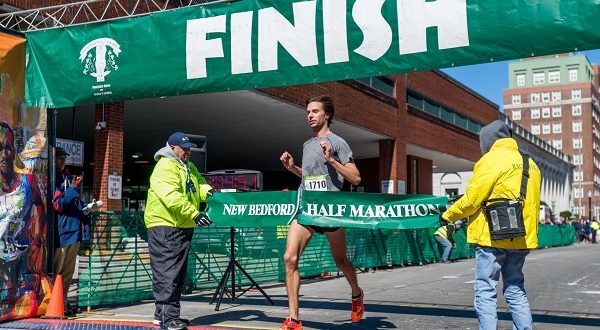 Crowds of runners once again will flow through downtown New Bedford and around the city on Sunday, as the New Bedford Half Marathon returns to the City after a two-year hiatus due to COVID-19.

Mayor Jon Mitchell applauded the return of the race, saying, “The Marathon brings out camaraderie among runners, an outpouring of support from residents, and fantastic views of the city from the course. That’s why the race’s absence was deeply felt by everyone, and that’s why there is much enthusiasm about its return. I’m grateful for all the efforts of the Friendly Sons and all the volunteers for making it happen.”

“The Friendly Sons of St. Patrick, along with our volunteer race committee, are excited to once again host this annual showcase of New Bedford to the running community,” said Dan McCarthy, Race Director for the New Bedford Half Marathon Race Committee. “We couldn’t do this without the support of the City, the administration, the council and the hard work of the staff at multiple city departments. This race is a New England Tradition that has been sorely missed these past two years.”

The race is hosted by the Friendly Sons of St. Patrick, a New Bedford-based fraternal organization, and the City of New Bedford. The course is a challenging one that includes two major hills, while featuring waterfront views and hundreds of volunteers and cheering fans lining roadways along the loop route, which starts and ends on Pleasant Street near City Hall.

Organizers have taken great care to ensure that the New Bedford Half Marathon continues to maintain its reputation as one of the safest races in New England. Scores of New Bedford police officers will patrol the course, and ambulances staffed by New Bedford Emergency Medical Services will be stationed throughout the city.

The New Bedford Police Department has asked runners and spectators not to bring bags to the course, as backpacks, suitcases and rolling bags will not be permitted near the start/finish area. Police also ask that spectators and runners report any suspicious activity to one of the many police officers available throughout the course leading up to, during, and after the race.

Parking will not be permitted along the race route, and “no parking” signs will be posted along the route to warn motorists. In addition, the race route is closed to vehicular traffic. Residents are advised to plan ahead, as traffic will be restricted from about 11 a.m. to 2 p.m. Police encourage residents who live in the south end of the city, especially those who live on the peninsula, to plan to leave for any necessary travel before 10:30 a.m. and return after 1:30 p.m. Residents are encouraged to avoid Route 18 southbound from Union Street while the race is underway.

Police have identified two alternative routes for people who need to gain access inside the course perimeter. Persons who may be visiting a patient at St. Luke’s Hospital or who need access to the inner perimeter for other reasons should consider the following routes:

The entire New Bedford community is involved in welcoming the runners and their friends and families. New Bedford is a great place to shop, dine and explore before and after the race. Please visit www.destinationnewbedford.org for more information.

For more information on the race and race day activities please visit: www.newbedfordhalfmarathon.com.

6 Restaurants to Try Near Your Fenway Apartment