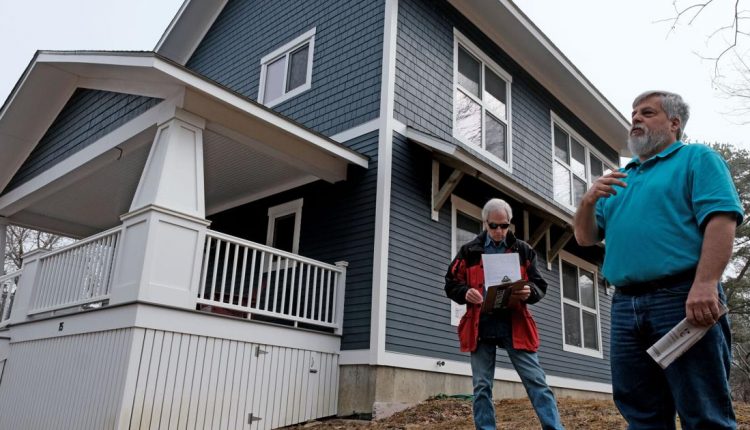 ROCKPORT — John Cigliano’s home on Ruthern Way isn’t quite like other homes in town.

The three-bedroom, two-bathroom house has a 3-inch cement slab separating the first and second floor, triple-pane windows that took six workers to lift during construction, and a composting unit down in the basement.

Once the Ciglianos get a back-up battery generator to provide power during emergencies, their home will generate the same amount of energy it produces.

Cigliano provided a tour of his home to a curious handful of Rockport residents on Friday. The purpose was to show that net-zero energy can be achievable and cost-effective at any building in Rockport.

Rockport Climate Action helped organize the tour. The group is sponsoring a non-binding pledge at this spring’s Town Meeting to get all town operations at net-zero energy by 2040. Member Tom Mikus was present as was Selectman Ross Brackett.

Cigliano is the director of environmental conservation and professor of biology at Cedar Crest College in Pennsylvania. He holds a doctorate in biology from Boston University.

“I wanted to live what I preached,” said Cigliano about his energy-efficient home.

Joining Cigliano on the tour was Alan Battistelli, the contractor who supervised construction up until the hoome’s completion in 2018.

“None of my previously clients had gone as far as John did” with renewable energy sources, Battistelli said. “Coming from his background, he was really plugged in to the whole process. It took two years of planning and pricing it out to get the fastest return on investment.”

The Ciglianos’ Rockport home is a vacation house but John and his wife Karen plan to move in full-time once both retired both retired.

“It’ll be hopefully in next few years,” he said. “Sooner rather than later.”

Solar panels on the roof power the all-electric home. So much energy is generated from the panels that National Gird pays the Ciglianos for their surplus electricity.

“We get credit for the electricity we generate that goes against cost,” Cigliano said. “I don’t know how much we get, but it’s probably $1,500 to $2,000 a year from selling the credits.”

According to Battistelli, the home is one of the most insulated he’s ever seen. Blower door tests, used to gage home air leakage, clocked in at 405 cubic feet of air moved per minute (CFM). Average homes score around 1,250 CFM.

A high-efficiency air-source heat pump circulates air between typically hot, moist rooms such as kitchens and bathrooms and more dry living spaces. On top of that, the concrete that separates the first and second floor serves as a thermal mass, absorbing sunlight and providing passive heat all through the night and during the winter months.

Only shower, sink and dishwasher water goes through the leach fields out back. The Clivus New England compost toilets in the home use foam and only three ounces of water per flush. Every five to 10 years, the company comes by to empty out the compost tank.

It is estimated the Ciglianos pay only $478 per year on energy bills. John Ciglianos said due to the savings, the solar photovoltaic system, which convert sunshine to electricity, will pay for itself in about five years, and the solar hot water tank in about four years.

“(The house has) worked amazingly well,” said Cigliano. “We built this house to align with values and do what we can to combat climate change. The economic benefit we got is amazing. I think it will continue to expand. Although it’s easier to build a net-zero house than a conversion, there’s no reason why a person shouldn’t renovate their hope to have complete insulation and add solar power.”