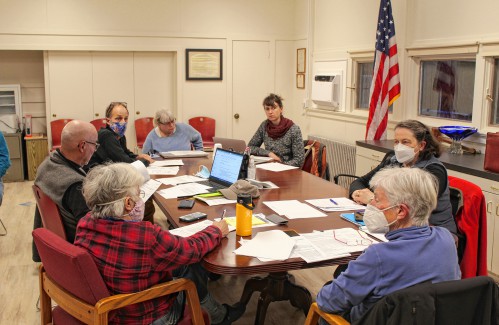 Committee Chair Elizabeth Kidder said both towns are working out budget details for the temporary agreement, but the deal should be ready before the start of the new fiscal year in July in the “worst-case scenario.”

“Everybody expects it to happen and it’s just the timing,” Kidder said after the meeting. “It’d be nice if it happens sooner.”

Kidder said “Bernardston is looking at the budget closely,” but that finances will be a more difficult hurdle if the towns want to make the agreement permanent in the future, considering Leyden does not have to give up any police assets under the temporary agreement.

“For interim agreements, you don’t turn over assets like police vehicles. … (Bernardston Police Chief James Palmeri) had no problem with that. … Chief Palmeri is totally committed to this and he’s been great to work with,” Kidder said. “At some point, it will be an executive session to finish the interim agreement.”

Due to its status as an interim agreement, it could go into effect as soon as both town selectboards sign it. The full, permanent agreement, however, would need to be approved by residents of both towns in a Town Meeting vote.

To familiarize residents with the interim plan, member Jack Golden said the Public Safety Advisory Committee will hold at least one public forum in late April or early May to “hear from the town and what their hopes and needs are” about the future of emergency services.

As the committee waits for both selectboards to iron out the interim deal, Kidder said Town Counsel Donna MacNicol “tasked us with going back through 102 years of Town Meeting warrant articles to research definitively what we have passed as a town.” More specifically, Leyden needs to find out when it officially adopted a police department, as that information will be needed should the towns decide to enact a permanent shared policing service.

The issue, however, is no one in town is sure where to look. Longtime resident and Selectboard Chair Bill Glabach said Town Meeting warrants are in each town report dating back to the late 1800s, which the town’s Historical Commission may have. He also said there was a fire in 1929 that may have wiped out some documents and others may be in people’s attics.

The other alternative may be to contact the Attorney General’s Office, which approves town bylaws, but Glabach said there is a chance that approved bylaws from Leyden in the 1900s never made it to the AG’s office.

“It might’ve got passed at Town Meeting and the town clerk or whoever was supposed to forward it dropped the ball,” Glabach said. “We have trouble keeping records of yesterday.”

The “rat’s nest” of history notwithstanding, Glabach said a good place to start would be the mid-20th century.

In other business, the Public Safety Advisory Committee expects the state Division of Local Services to officially announce if Leyden got the Efficiency and Regionalization grant it applied for within the next few weeks.

“We’re very, very hopeful in receiving the grant,” Kidder said. “We had such a good meeting with the state that we’ve been notified in a few weeks they’ll be doing a formal announcement.”

If received, the town would use the grant to continue working with consultants from the University of Massachusetts Boston’s Edward J. Collins Jr. Center for Public Management.

“They’ve been so great to work with,” Kidder said. “We’re sort of in limbo until we hear officially from the state. … (We plan to) move forward quickly.”