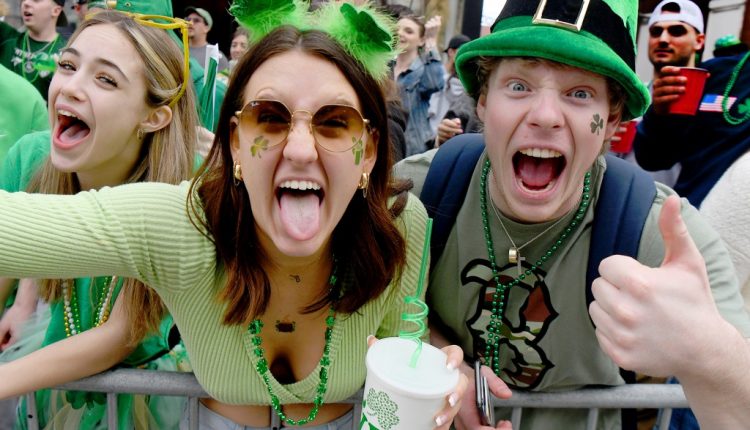 Southie revelers welcome back parade after years blanked by pandemic

Joe Wells and his green sweater-clad miniature poodle, Pogo, waited for three hours next to the Broadway MBTA station to secure a front-row spot at the starting point of Sunday’s St. Patrick’s Day parade.

Wells, 39, of South Boston, seated in a folding chair and smiling behind shamrock-shaped sunglasses, said it really wasn’t much of a wait, when you think about it.

“I bought a condo here maybe three months before the pandemic and when I bought I was really looking forward to the parade and being so close to it, so of course there hasn’t been one since I moved,” he said.

Wells gestured to the green, orange and white confetti drifting down West Broadway and marking the parade’s start. “It’s about time to get back to normal things like this. This is what it’s all about.”

Returning for the first time after two COVID-19 restricted years saw the event canceled, South Boston’s annual St. Patrick’s Day parade brought thousands of revelers to the city Sunday morning, with many expressing joy at the return of a Boston staple, even if it was a smaller event than in years past.

The parade, organized by the South Boston Allied War Veterans Council, traditionally runs through South Boston to the monument at Dorchester Heights, but featured a shortened route that ended on Farragut Road this year. Organizers said the decision to shorten the route was made during the recent omicron-fueled surge of the COVID-19 pandemic.

Despite the shortened route, Sam Limgello, 21, of Dorchester, who says he has attended every St. Patrick’s Day parade since the age of 7, said that it just wouldn’t be the same holiday without it.

“It’s just so great for it to be back,” he said. “I really looked forward to this, this year especially, after COVID.”

The revelry turned to jeering briefly, according to Edna Belz who lives on West Broadway, when a group of demonstrators unfurled a banner reading “Keep Boston Irish” across the parade route from her apartment.

“In all my years at this parade I’ve never seen nothing like that,” Belz, 44, said. “We’re used to the noise and the partying but that’s the first I’ve seen anything along those lines.”

Belz said the demonstrators showed well before the parade’s 1 p.m. start and that something “seemed off” about the group dressed in olive drab from the moment they arrived. According to Belz, the demonstrators were quickly chased off by other paradegoers soon after displaying the banner.

“You can’t be like that in Boston,” she said.

Javier Valasquez, 43, who says he’s lived in South Boston for three decades, said those kinds of demonstrations don’t get to him. Especially not after the long awaited return of the parade.

“It’s gorgeous out. I’m so happy things are back,” he said. “We got brothers and sisters in the parade now too, so that makes me even more happy. What could you complain about?”

The Recorder – EarthTalk: Talking to kids about climate change