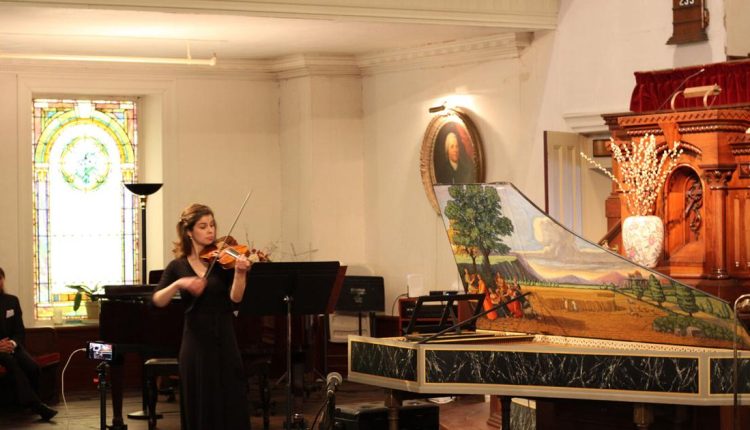 An audience who applauded the return of live concerts to the Gloucester Meetinghouse on Sunday also brought compassion as they donated more than $4,500 to the International Rescue Committee to support war relief efforts in Ukraine.

The performance concluded with the Ukrainian national anthem, whose words include, “Our enemies shall vanish like dew in the sun; soul and body shall we lay down for our freedom.”

“We were greatly encouraged by this outpouring,” Nazarian said. “It far exceeded all our expectations, showing the concern and great generosity of our community concerning the struggle for freedom in Ukraine.”

This was the first of three spring concerts presented by the Gloucester Meetinghouse Foundation, a nonprofit organization dedicated to preserving the historic building and increasing its use for public functions. This was the first live performance in the building since the pandemic began more than two years ago.

The next concert, scheduled for Sunday, May 1, will be a Holocaust memorial performance featuring a specially commissioned orchestral work to be presented jointly by Temple Ahavat Achim and the Meetinghouse Foundation. The final concert on Sunday, May 22, will present the Appleton Consort, performing Bach, including the “Brandenburg Concerto No. 5,” on period instruments.

The foundation is modeled on a nonprofit that supports Boston’s famed Old North Church. The Gloucester Meetinghouse Foundation provides a base for secular support to preserve this historic Gloucester building, built in 1806 as the home of the first Universalist church in America.

Information about upcoming concerts and events, the foundation, and an internet link to a YouTube recording of Sunday’s Bach birthday concert is available at www.gloucestermeetinghouse.org.

19 Simple Cooking Hacks Everyone Should Know