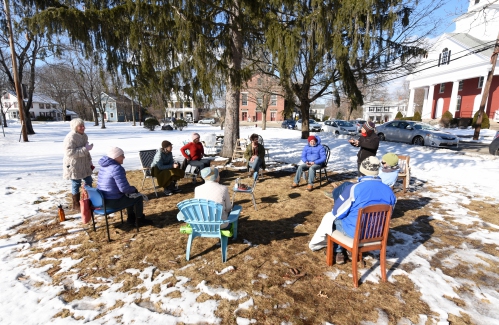 MONTAGUE — It sounds crazy, but Montague has been singing daily since COVID-19 lockdowns began two years ago.

Not the entire town, of course. Yet it seems to boggle many minds: a group with typically eight or more singers on the Town Common in blizzards, downpours, scorching heat or sub-zero windstorms each afternoon since March 18, 2020.

“You tell people what we’re doing, and they ask, ‘When is it? Every Tuesday?’” says Will Quale, a core group member, who set up a TownCommonSongs.org website to help singers keep track. “And you correct them and repeat that it’s EVERY DAY. It doesn’t sink in. It doesn’t fit anyone’s idea of what’s possible.”

If the notion of an hour-long daily sing outdoors in this little village is hard to grasp, so is the fact that there’s no organization, no leader, and that this ritual happened almost by accident.

“Everything had ended,” says Laurie Davidson, another core member, recalling her early-morning run on March 15, 2020, when with neighbor Tamara Kaplan she hatched the idea, inspired by shut-in Italians making music from balconies.

Both women had sung together in Greenfield Harmony, a chorus that had recently been silenced by COVID.

The spontaneous event they announced by word of mouth and email drew a dozen neighbors.

“People were desperate for something. ‘Let’s do it again,’” they said when it was over, Davidson remembers. Their second event, on the Common on March 18, was so successful that it just kept going.

Standing in a large circle 10 feet apart and mostly unmasked, a group of a dozen or so Montague residents showed up to sing whatever spontaneously struck their fancy. The leaderless nature of what emerged stuck, one afternoon following the next, all by consensus all along the way.

“We’ve found some sort of delightfully unorganized consistency somehow,” reflects Quale, who has an ethnomusicology degree and has led pub singing for years. “We have this very egalitarian, open format where no one’s giving it direction, and a whole lot of people are giving it enthusiasm.”

That may be a secret to the success of what could be the only ongoing, daily outdoor community sing of its kind anywhere.

“Everyone seems to be really good at listening to everyone else, figuring out what’s good for the group. And that’s magic. I don’t know how we do it,” says Quale, for whom the daily sings have been “a lifeline … a steadying, constant presence that’s gotten me outdoors, often in the sunshine for about an hour, socializing with a nice community of friends. When I went into (winter) hibernation, the singing got me out.”

And unlike monthly pub sings, these daily gatherings have helped the group build a repertoire of some more complex songs, which Quale likes.

“Here, I’m constantly having the opportunity to push myself to try that song, to go out on that limb … And I love that.”

More than 360 songs are on the website, with lyrics, historical background and links to video performances. Quale says hundreds more titles have yet to be listed.

The songs, requested randomly by singers as the mood suggest, includes plenty of titles everyone knows, like “This Land is Your Land” or “Here Comes the Sun.” But there are also folk offerings, freedom songs, inspirational anthems and Broadway favorites.

There are camp songs, hymns and anthems like “Let Union Be,” seasonal songs like “Mud, Mud”, and nature songs about skunks or worms, wind, water.

“There’s no filter for what’s acceptable,” says Tim Van Egmond, a professional storyteller and musician who’s sung folk songs professionally for years. “It really does run the gamut. There are so many songs I’m so glad I learned there, that I didn’ t know about. Once I started coming, I thought, ‘Oh my god! What a treasure!’ There’s ‘Let union be in all our hearts,’ which is almost a theme song because it’s so in line with what the general sentiment is. There are the inspiring songs and the ones that are very spiritual, or the really fun ones that have motions that go with them ….It’s what everybody brings to it. It’s so community based.”

If there seems like a wondrous therapy to the daily ritual, it may be because of its organic and egoless nature.

“It’s the way everybody listens to each other, appreciates each other,” Van Egmond says. “You don’t have leaders and followers. Everybody is making space for each other. There’s nobody interested in being a star or getting a spotlight more than anybody else. Everybody has the space to think of a song,” sometimes looking around to see who can lead it or remember words. Sometimes it’s a matter of Googling the title on phones, or checking the website, or a copy of “Rise Up Singing” by Amherst song leaders Annie Peterson and Peter Blood.

Although many of the singers who’ve come, from Montague and beyond, have sung before in various choruses, Van Egmond notes, “Here it’s just people who basically said, ‘We want to sing.’”

From minute to minute over the course of an hour of singing beneath the church’s clock tower, inspiring periodic singing of “ring out, bells of Montague,” it’s hard to know what the next song, or even type of song, will be. It’s also impossible to predict who will show up, or what age.

“It’s extremely unpredictable what we’ll be singing,” says 15-year-old Solena Davidson Carroll, who often joins her mother at the sings and has sung with several area choruses. “It’s kind of mysterious, kind of captivating. It could really be anything.”

Although at the outset there were just a few shared songs, there’s now a solid core, with constant additions.

“You feel you know all these songs, but you go, and somebody has a new song and you completely love it, and it becomes your new favorite,” says Davidson Carroll, who offered the Taylor Swift song “22” to celebrate Feb. 22 (2-22-22). “For me, having lots of different ages (singing) is kind of fun, because people have different songs to bring, from different places and different times, so they might have a different song they might know that I wouldn’t know.”

For Addie Rose Holland, the gatherings offer a chance to sing with her 5-year-old daughter, Olive, as well as her father, Ray Holland.

“For Olive, it’s this weirdly normalized thing,” she says. “I don’t think she considers whether this happens in every community or not. She’s very keen on every song that’s sung and will remember and sing them at home. She may not be singing along, but she’s listening closely and internalizing them. She’s singing all the time at home. More often than not, it’s a song from the sing.”

Holland, who recalls singing with her family while growing up in Vermont, adds, “I feel incredibly lucky that my dad and my daughter can share this experience. I would go every day if I could,” but because of her work schedule is limited to weekends.

“Even though showing up every day for two years is not a simple matter by any stretch, it simplifies it for us to participate, and makes it possible, especially since all we have to do is walk down the street.”

She often takes her daughter to the monthly full-moon singing sessions that have grown out of the daily sings, as well as holiday caroling. Olive even suggested a lantern-festooned winter solstice processional sing.

Even in the pouring rain on the church portico, even on the most wind-chilling days, the gatherings never get old because every day seems a celebration of something somewhere: Day 300, Day 500, Pi Day on March 14, One Million Minutes of songs, “Plough Not-Monday,” Perseid, or the birthday of a participant’s singing father.

“One of things that really works for us, instead of being an old established group from pre-pandemic times that was trying to find a way to sustain ourselves,” observes Quale, “is that we’re just folks in the town, coming from a variety of different musical backgrounds, sharing a whole bunch of things that are very new to various other people. For us having this weird, wonderful smorgasbord of songs from such a variety of places, genres, times … that’s just what we do. That’s our sound.”

“These folks … are so amazing, learning and singing these songs with great gusto,” she blogged. “What if every town /city had a standing daily sing. Can you even imagine?!?”

One guest last fall, University of Massachusetts doctoral student Jessica Wiseman, was doing research for her dissertation on community music.

“When I began this study, I thought I would find people preserving folk music. Instead, I found folk music preserving people,” she wrote. Instead of “refined concerts and professional theaters,” Wiseman discovered “imperfect music by imperfect musicians that provided the perfect outlet for the people of this community.”

She questions whether the daily singing would have survived if not for the pandemic, but says, “It’s about so much more than the music. It’s about the community that’s created, the hope the group brings, the normalcy the group brings, about a sense of belonging, a sense of security, in what are still unpredictable times.”

Some believe the quality of the group’s ensemble singing has improved through daily practice, but the strength of the bonds – even among people who hardly knew one another at first – have certainly deepened.

“We’ve now shared so many experiences on the Common, so there’s a lot of shared culture,” says Davidson.

When storms threaten, regulars check to assure the singing goes on. Singers even come together to share a Thanksgiving or a Christmas meal.

Quale organized the group’s website partially as a resource for other communities to follow Montague’s example, yet that hasn’t happened. It’s unclear why only this little village has succeeded in creating such a dedicated singing ritual.

It may have to do with attitude.

“We do have an unusual number of people who’ve had song-leading or music-teaching experience or performing experience,” Quale says. “Not every village has that.”

Wiseman guessed it may be that Montague, with transplants drawn by contra dances and the late fiddle master David Kaynor, has become something of a traditional musical mecca.

Unlike larger area towns less successful at launching sings, where “town officials are a little more on top of things, saying ‘You can’t gather’” because of COVID, she observes, “This was just a more informal gathering,” with die-hards simply deciding they needed to sing, so “they’re going to find a way to continue that.” They never challenged the wisdom of safety precautions about the pandemic, Wiseman observes.

She’s researched whether Montague’s ritual is unique but hasn’t found anyplace else where daily singing has taken hold.

“I’d love to think all around the world there are these little groups that have provided so much to the people who attend them,” Wiseman says. “If you can’t take your little corner of hope and believe there’s more of that elsewhere, that other people have come together to provide comfort and light and security and safety through the pandemic, that’s kind of bleak.”

In Montague, Davidson says, “All of this group building is a magical, silver lining of the pandemic that might not have happened if so much of the rest of our lives hadn’t shut down.”

Richie Davis blogs at RichieDavis.Net and has two published collections.