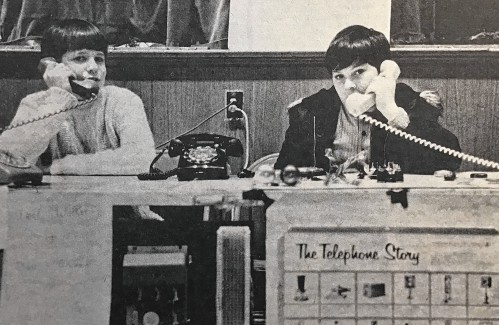 ■Seventh-grade first-prize winners of the St. Michael’s Junior High School science fair, held last weekend, were David Cronin and Jeffrey Walker. Their exhibit explained the story of the telephone. The fair included projects of students in Grades 7 through 9.

■County Commissioner David B. Musante Jr. told the Northampton Charter Commission last night that city government should include a professional assistant to the mayor. Musante said he believes this move would “open up the arena,” allowing more people to run for mayor by keeping the position a parttime job.

■Visitors got a glimpse of the renovated Forbes Library yesterday and got news of a reopening date: April 27. For three hours yesterday, a continual stream of an estimated 500 people got to view the look of the $1.8 million library reconstruction, which is close to completion.

■New school superintendent Nicholas D. Young has signed a three-year contract with South Hadley and submitted his resignation as school chief in neighboring Hadley. Young, 44, has headed Hadley schools for the past 11 years.

■The University of Massachusetts spent $1.4 million to reduce noise and vibrations in a building that houses mice and other research animals so they wouldn’t be disturbed by nearby construction. The university says the spending is justified by a need to protect research animals from disruptions and because some of the building improvements were needed anyway.