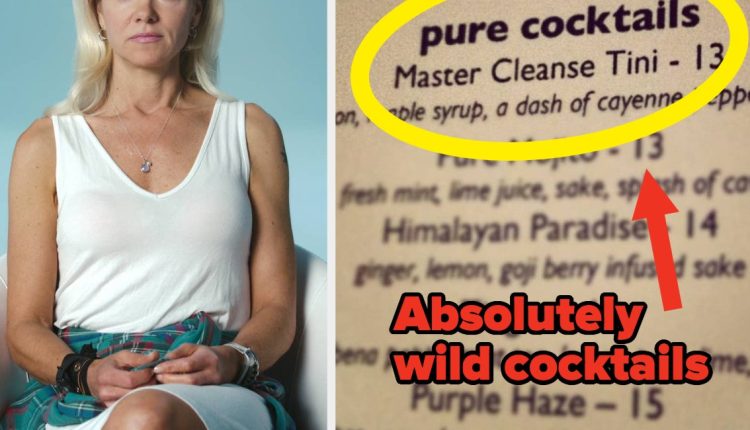 If you’ve watched all of Bad Vegan on Netflix, you’re more than familiar with the unbelievable tale of Sarma Melngailis and her vegan food empire.

But what about Pure Food and Wine, the iconic restaurant that launched her into infamy?

Sarma looked like this back when it opened — still rocking the pigtails, it seems!

Pure Food and Wine’s kitchen is not like other restaurant kitchens. To start, there aren’t any ovens or heat!

Once they moved into the space, Matthew wrote about how they set up the kitchen, too: “Once we removed the hood, we set about creating a space that was designed for this food, our new food. Compete with dehydrators and plenty of counter space.”

The restaurant was an overnight success. Pure Food and Wine started hosting events that brought in Hollywood types like Jason Lewis from Sex and the City and longtime vegan Woody Harrelson.

And while it doesn’t have much to do with anything, I just love this photo of Woody getting up close and personal with some white truffles:

Soon after opening, Matthew and Sarma threw a launch party for one of their co-bylined cookbooks, Raw Food Real World in 2004. Celebs like Kyle MacLachlan, Ann Curry, and Daryl Hannah showing up for the party:

According to Matthew Kenney’s book, Cooked Raw, he left Pure Food and Wine in 2005 after he and Sarma broke up.

One of Pure Food and Wine’s main draws for New Yorkers was the expansive and beautiful backyard seating.

The backyard is even more magical at night.

The backyard made for a great happy hour spot — and happened to be just a couple of blocks from BuzzFeed’s New York headquarters.

Raw food was incredibly experimental for the time. “Our concept made eyes roll in those days,” Matthew wrote.

The Heirloom Tomato Lasagna was indeed the restaurant’s crowning jewel.

Fun fact, though: You can actually still order the lasagna today! If you’re local to California, Matthew serves it at his Venice restaurant, Plant Food and Wine.

The desserts were out of this world.

But I can absolutely admit that sometimes the menu could be a little bit wack. For example, take the “Master Cleanse Tini” from their drink menu:

You might not know that One Lucky Duck shared the same kitchen as Pure Food and Wine. It may have been around the corner and on another street, but the two spots were interconnected via their kitchen. It was also tiny:

Mostly a juice bar, One Lucky Duck’s liquid menu looked like this:

But they actually made a lot of raw food goodies as well.

I still miss their macadamia nut crackers, and the vanilla crispies were the bomb, too:

I can confirm that it was definitely a celebrity hotspot at the time. While it was long before DeuxMoi’s Sunday Spottings, they were definitely still spotted — and Pure took notice. Like this photo they posted to Instagram of Boy George eating there in the New York Times…

…this haul from One Lucky Duck that Lena Dunham posted…

…and Bill Clinton posing with the Pure Food and Wine staff, back when he was dabbling with a vegan diet.

Yes, you could often find Sarma at the restaurant when you were there — at least until Shane/Anthony came into the picture.

And finally, Sarma’s dog Leon could often be found at the restaurant, too. Here he is in the backyard:

Get all the best Tasty recipes in your inbox! Sign up for the Tasty newsletter today!

Two alleged Mass and Cass pimps arraigned; one accused of kidnapping and stabbing victim, telling her ‘I own you’