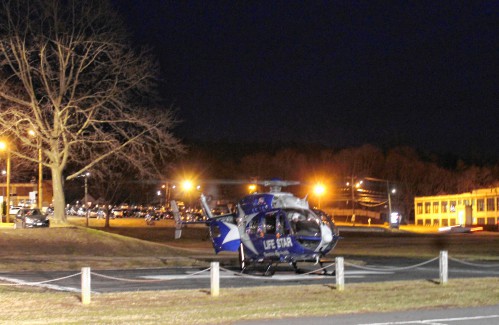 GREENFIELD — A man experiencing a mental health crisis was set to be airlifted for medical treatment Wednesday night after reportedly lighting his clothes on fire before getting into a vehicle and driving to Turners Falls.

According to Greenfield Deputy Police Chief William Gordon, police ultimately stopped the man near the Fifth Street Bridge, also known as the Green Bridge, near the canal.

The call to police came in at around 7:05 p.m. Police said the incident started in the parking lot behind Blessed Sacrament Church on Federal Street in Greenfield.

The man was transported by AMR ambulance to Baystate Franklin Medical Center in Greenfield at 7:35 p.m. He was being stabilized and was set to be airlifted to a different hospital as soon as possible, Fire Chief Robert Strahan said near the helipad near Baystate Franklin, Blessed Sacrament Church and Greenfield Middle School at around 7:50 p.m.

The two bridges over the Turners Falls canal and much of Turners Falls Road into Greenfield were temporarily closed so rescue personnel could respond to the situation. Both were back open shortly after 7:35 p.m.

The Montague Police Department and Turners Falls Fire Department were also dispatched to the bridges.