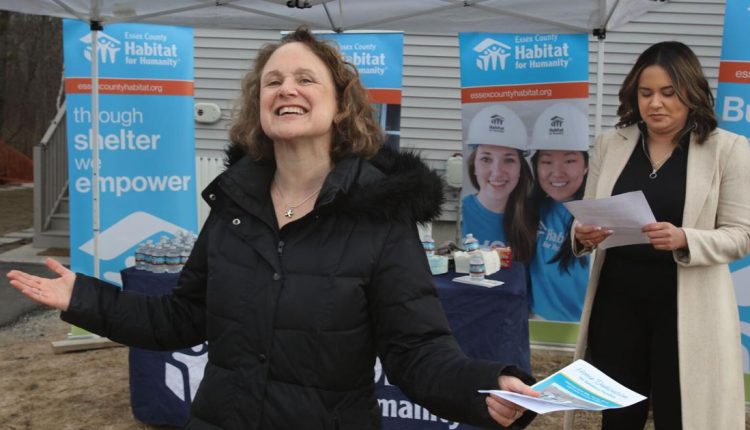 SALISBURY — A trio of new Old Colony Road families got a chance to celebrate their homeowner status when Essex County Habitat for Humanity hosted a dedication ceremony for them Wednesday afternoon.

Essex County Habitat for Humanity has built three duplexes and a single-family home on Old Colony Road land donated by the Institution for Savings. The nonprofit organization has also recently been cleared by the town to begin construction on another duplex next to the homes on Old Colony Road.

Three families have been chosen so far to occupy the completed homes and an outdoor ceremony was held on Old Colony Road to celebrate the achievement Wednesday afternoon.

Willy Gerard is a single father who moved into his new home in December along with his 7-year-old son and 9-year-old daughter.

The Haitian native had previously moved his family to Salisbury where he was renting after their home in Roslindale became overcrowded.

Gerard said his new home on Old Colony Road has given his family a welcome sense of stability.

“It’s been great,” Gerard said. “We had originally moved to Salisbury for better community and schools for the kids. Then I heard about Habitat for Humanity and applied.”

Gerard put in over 130 sweat equity hours working on the Salisbury construction site where he now lives, and said being a homeowner is the “greatest feeling in the world.”

“I am 48 years old and a single dad with two children. Not in my wildest dreams would I ever think that I would be here,” Gerard said. “I’m still pinching myself.”

Single mother Jessica Rivera works 40 to 70 hours a week as the sole provider for her four kids.

Rivera said she and her family occasionally found themselves homeless over the years, but their new home in Salisbury is a big step up from their three-bedroom apartment in Haverhill.

“I’m living in the pot of gold at the end of the journey,” Rivera said.

People who find themselves homeless can often feel they are in an inescapable position, according to Rivera, who went on to say that she could always find someone who had it worse than her.

“You look outside the windows of your vehicle and you see other families getting in line after walking a long distance to eat. I was lucky, I had a car and I could drive to my two jobs,” she said.

Finding adequate housing was a difficult journey for Rivera, but she said, “You can still get there.”

“There are a lot of people who will be negative and tell you that it is never going to happen. But it will,” she said. “Hard work pays off and being good pays off, too.”

The third family did not wish to be identified but is comprised of two adults and a child.

Members of the Board of Selectmen, Institution for Savings Senior Vice President, Marketing & Communications Mary Anne Clancy and state Rep. Jim Kelcourse, R-Amesbury, were also in attendance for the ceremony

Selectman Ronalee Ray-Parrott, a member of the town’s affordable housing trust, said she had the pleasure of working a few build days on the new homes herself.

“Just to know that everything is theirs is a moment for each of these families to be able to say, ‘We did it, we have it, we own our houses,’” Ray-Parrott said.

Essex County Habitat for Humanity board President Dick Sumberg made sure to thank recently deceased Newburyport architect Jonathan Woodman, who drew up the original designs for the new homes.

Sumberg said he hoped Woodman was looking down at the ceremony and smiling from “wherever architects go.”