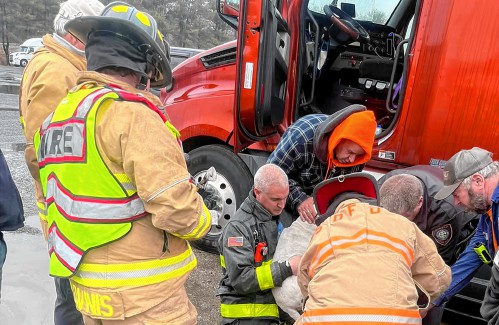 WHATELY – There’s a pooch that’s likely ready to hit the road again thanks to the Whately Fire Department and the South Deerfield Fire District.

Whately’s department received a call at roughly 8 a.m. on Thursday to report a dog that got its back paws caught in the grate of a tractor trailer’s saddle tanks at the Whately truck stop, Fire Chief John Hannum said.

According to Hannum, firefighters removed the grate from the truck and then cut free the dog’s paws, which evidently got stuck when the animal was trying to climb into the truck’s cab. The process lasted about 20 minutes, he said.

The dog belongs to the truck driver, who Hannum said was going to bring his four-legged friend to the veterinary clinic in South Deerfield to treat some bleeding on the dog’s back paws.

“It was nothing major,” the chief said.

Hannum said the dog was very appreciative, sniffing and licking his rescuers once he was freed. He said this was his first call of this nature in his 50-year firefighting career.