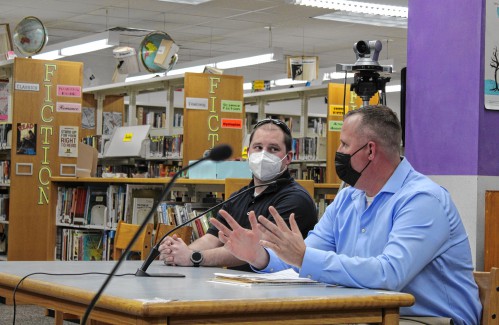 The Recorder – With candidate’s withdrawal, Northfield and Pioneer look to get ‘on the same page’ on SRO

NORTHFIELD — The town and Pioneer Valley Regional School District need to go back to the drawing board, following the news that the candidate chosen to be the new school resource officer opted not to take the position.

The announcement, delivered to the Selectboard by Police Chief Jon Hall on Tuesday, was met with shock from board members, and led to a lengthy discussion on how a recent Pioneer School Committee meeting may have impacted candidate Michael Williams’ decision not to accept the job.

At March 10’s School Committee meeting, Hall and current part-time School Resource Officer Billy Kimball spoke to the committee about the importance of having an officer at the school. While Kimball has worked part-time due to other job commitments, spending three days a week at Pioneer, Hall and town officials said the position was always intended to be full-time and has been previously.

Under the memorandum of understanding the school district signed with Northfield, the district pays half of the school resource officer’s hourly rate while he is in the school and the town picks up the other half. The agreement states the district will pay up to $29,530 per year.

However, the agreement only covers services through June 30, 2023, and the school district and town would have to negotiate a new contract beyond that. School Committee member Michele Giarusso, who serves on the Budget Subcommittee, noted the district cannot make any future decisions regarding the school resource officer’s position until further analysis of the school’s budget is done.

“I just want to make sure we’re not committing ourselves beyond ’23 in light of what our budget looks like,” Giarusso said during the March 10 meeting.

Speaking Tuesday, Hall said he felt the “lack of definite job security” is “the main reason” for Williams’ withdrawing interest in the job.

“I understand where he’s coming from,” Hall said. “This might not be a position for the next five years; it might be cut next year. … I think it was just too much of a gamble.”

“Being a candidate, you’d decide you wouldn’t want to invest in that community,” agreed Selectboard Chair Heath Cummings. “That lack of solid future planning just in that one instance is just having this massive ripple effect.”

Although no votes were taken at the School Committee meeting, members also discussed whether there is a need for the school resource officer to work five days a week, compared to Kimball’s current three days.

“In your opinion, do you feel that five days a week would be beneficial?” School Committee Chair Julie Burke asked Kimball.

“I do,” Kimball replied. “You never know when something’s going to happen. My days rotate, I’m not on a set schedule.”

This discussion on full-time or part-time “blind-sided all of us,” said Town Administrator Andrea Llamas, noting she had previously sent the school district the job description.

“I’m not sure the new School Committee members understood what a five-day person entails,” Llamas said. “If you look at the job description, there’s a lot more in there” than what is possible in Kimball’s part-time capacity, including time spent as each district elementary school. “They have not experienced that position, I think, as it would be intended.”

“I think this is a lack of understanding,” agreed Cummings, himself a former Pioneer school resource officer. “They don’t have a full grasp of how Pioneer has been run and how the citizens of these towns want it to be.”

Cummings said he’d be happy to explain to the committee what his responsibilities had been as a full-time school resource officer.

Hall, likewise, said he was under the impression all constituents were aware the position would be full-time with Williams’ hiring.

“I really don’t see it as being possible to find another Billy Kimball who’s qualified and could do it part-time,” he added, noting that the town doesn’t have a second-choice candidate to suggest.

Hall and Selectboard members emphasized how excited they were when it looked like Williams would be taking the position, and reiterated the need to remedy the situation.

“I actually walked away from that interview (with Williams) very impressed and feeling very positive about Northfield and this candidate’s contribution to the positivity and the professionalism across the board,” Jacque said. “I’m just so disappointed and so sorry that we had the candidate go through the process and not have this all squared away. … We need to do something to fix this ASAP.”

“It’s unfortunate we’re in this spot now to decide where we go from here,” Cummings said. “We don’t want to lose this candidate. … This is one of the top people I think we could have had.”

Hall said if he needs to go through the hiring process again, it’s important that the school district and town are in agreement on what they’d like to see from the school resource officer’s role.

“I’m looking at it as a juncture where the community is not in sync. I really thought that we were on this one,” Jacque commented. “I think it’d be helpful for the school district, then, to take up the discussion further on what they want to do.”

Reached by phone Thursday, Interim Superintendent Patricia Kinsella said the Selectboard notified her of Williams’ decision to not pursue the job and she set up a discussion with Hall. She said her goal for the conversation was to “go through the contract again and make sure everyone’s on the same page.”

Kinsella said it is “far too early” to determine what steps the district would take in the event that the Northfield Police Department is unable to find another school resource officer candidate.

“We signed a two-year memorandum of agreement with the town and Northfield Police,” she said, “and that’s what I am working on and with.”

Do You Eat These Foods The Same Way As Everyone Else?