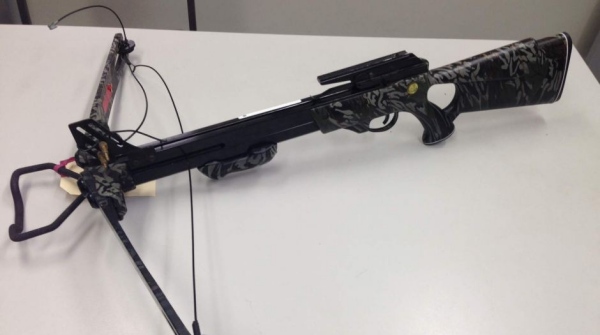 The Massachusetts State Police Special Tactical Operations Team (MSP STOP) early yesterday morning resolved a potentially dangerous situation in Cheshire, making entry into a residence and apprehending a man who had barricaded himself after aiming a crossbow at a State Trooper. Entry and apprehension by MSP STOP came after hours of negotiations with the suspect did not lead him to surrender voluntarily.

The MSP’s involvement in the incident began shortly after 5:30 PM Wednesday, when Troopers from the Cheshire Barracks responded to the Pine Valley Trailer Park at 4th Avenue in Cheshire to assist local police in serving a restraining order against the man. The order stipulated that the man was to immediately leave the trailer park residence.

After Troopers and a local officer approached the trailer, the man, identified as TIMOTHY TATRO, 40, of Pittsfield, pointed the crossbow at a Trooper. Showing immense restraint, Troopers and Officers established a perimeter around the residence and evacuated surrounding residents. MSP STOP responded to and took command of the scene. MSP negotiators and K9 teams also responded to the scene.

Throughout the night, State Police negotiators attempted to engage the suspect in conversation in order to persuade him to surrender peacefully. Simultaneously, MSP STOP Troopers continually monitored and assessed developments in the situation.

At approximately 1:45 AM, after repeated attempts to negotiate with the suspect over nearly six hours did not result in his surrender, MSP STOP, along with a State Police handler and his K9 Frankie, who deploy with the team, made entry into the trailer. They took TATRO into custody without incident or injury. TATRO was transported to State Police-Cheshire, where he was booked on charges of assault with a dangerous weapon, violation of an emergency restraining order, disorderly conduct, resisting arrest, and disturbing the peace. He was held at the barracks through the rest of the night until his arraignment in North Adams District Court yesterday.

The tactical skills, training and judgment of the Troopers, Officers, and K9 in the combined operation were integral to a peaceful resolution of the situation without injury to law enforcement officers or the suspect.