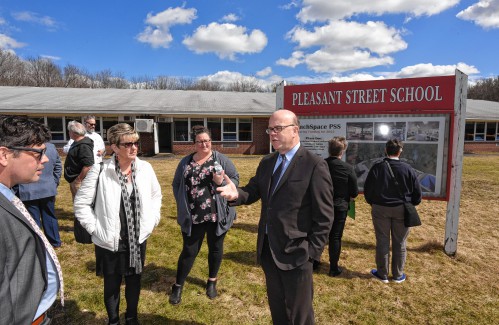 ATHOL — Three Franklin County and North Quabbin agencies will benefit from a total of $1.3 million in congressionally directed spending, including a $1.05 million allotment that will support creating a shared-use commercial kitchen and business incubator in Athol.

Greenfield Community College will receive $98,000, while the Opioid Task Force of Franklin County and the North Quabbin Region gets $200,000 and LaunchSpace receives about $1.05 million. The money is part of an estimated $138 million Massachusetts will be awarded in the fiscal year 2022 spending bill for a diverse 120 community projects, the state’s congressional delegation reported.

LaunchSpace, a nonprofit, member-based community workshop that operates out of the Orange Innovation Center, plans to use the $1.05 million to renovate the former Pleasant Street School in Athol, with a goal of having a shared-use kitchen and event space that will provide the community with access to a certified kitchen for food processing and production, food service workforce development programs and food access for underserved residents. The 24,000-square-foot facility is also expected to house child care, a classroom for business resource education, small business incubation suites, and small-scale agriculture.

On Friday, the nonprofit hosted U.S. Rep. Jim McGovern, who helped secure the money for the 2nd Congressional District of Massachusetts, and about 20 community members for an event at the former school to celebrate receiving the money.

“As you all know, this project will bring this old school building back to full functionality to support business incubation, affordable on-site child care, a community kitchen with a focus on self-sufficiency and food production and preparation, and employment training with our local community colleges,” McGovern, D-Worcester, said in the building’s function room.

Athol Selectboard members signed a five-year lease with Alec MacLeod, LaunchSpace’s co-founder, in July 2018, with the town retaining ownership of the building at 1060 Pleasant St.

“This will be a destination spot for a lot of people, not just in the immediate area, but, you know, from surrounding communities,” McGovern said. “I cannot wait to see the finished renovations and, more importantly, the community coming together and enjoying all this building will have to offer.”

McGovern said he secured more than $11 million for 10 worthy projects in his district.

Keith Bailey, GCC’s director of grants and government relations, said the college will use its $98,000 to upgrade some health occupation simulation training equipment and technology. He said the school will replace high-fidelity mannequins, which he explained have the ability to mimic human body functions, allowing for more realistic medical training. Bailey said these mannequins are so advanced they enable trainees to draw blood, take pulses, check breathing and give injections.

Bailey said it has yet to be determined how many high-fidelity mannequins will be purchased, as they vary in variety from average-size adults to babies to elderly. He also said the mannequins, which are easily transported and not site-specific, will be used for licensed practical nurse training at GCC’s satellite location, which is temporarily at Smith Vocational and Agricultural High School in Northampton.

“We are in the process of relocating that,” Bailey mentioned. “It’s not finalized, but it is likely going to be in the industrial park in Northampton.”

Debra McLaughlin, coordinator of the Opioid Task Force, said the $200,000 her organization is receiving will be put toward the ARISE Initiative, designed to promote recovery and self-sufficiency through tailored housing and employment. According to McLaughlin, nearly 24 million (or 10%) of people living in the United States report they are in recovery from substance abuse, and nearly 8,500 of those individuals are in Franklin County or the North Quabbin region. Research shows that access to supportive housing, education and training opportunities as well as life-skills training is an essential part of caring for those in recovery.

“We envisioned (the ARISE Initiative) as a much larger effort. We will use the $200,000 to help raise more money to support other aspects of this program,” McLaughlin said. “But we’re thrilled to have this support from our federal government.”

“In this pivotal moment, the Congress has risen to meet some of the most pressing challenges at home and abroad by passing the omnibus legislation,” U.S. Rep. Richard Neal, who is also chair of the U.S. House Ways and Means Committee, said in a statement. “I fought hard to secure nearly $8 million in Community Project Funding that is heading to western and central Massachusetts to address some of its most pressing needs. These investments support and foster economic development, making a real difference in the lives of so many in our community.”

A list of all Massachusetts projects to be funded can be found at bit.ly/3IoB7HA.