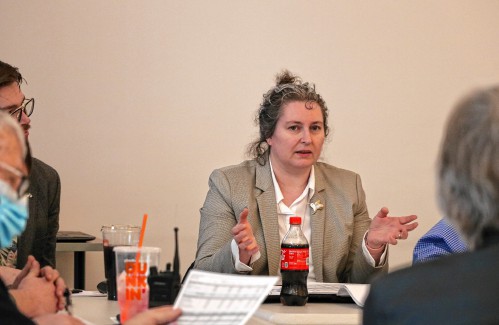 GREENFIELD — Those planning the construction of a new fire station on Main Street were hesitant Thursday to provide an estimated timeline for a groundbreaking, though they expect it to be no sooner than midsummer.

“I want to make sure we do things right and proper,” Katrina Pacheco with Pacheco Ross Architects told members of the Fire Station Building Committee, which met at the John Zon Community Center, marking the committee’s first meeting that was not held virtually. “And I know we’re up against the timeline of trying to get the building done, so you’re not renting the temporary longer that you have to.”

Project Manager Neil Joyce added that he anticipates the bidding process to open in May, which will take about six weeks to complete.

“My two cents is I would wait until we have bids in hand” to firm up a groundbreaking timeline, he said.

In addition to wrapping up design development, which includes the final selection of interior colors and materials, Pacheco said her team needs to meet with Eversource.

“One of those milestones is developing a system … that’s going to perform the way that you want it to perform and meet all the criteria for (clean energy) incentives,” Pacheco explained.

She said there are still a few “shifts” in the building’s interior design, such as the moving of a wall in the dining/day room.

“It’s not going to cause any major headaches,” Pacheco noted.

Joyce said he is about 75% of the way to the “finish line” with respect to the pre-qualification process — a process that determines which companies will be welcomed into the bidding process.

“Once the documents are ready, they’ll be invited into the bid process,” he said. “From there, it’s a regular procurement process. Only pre-qualified contractors are invited.”

Joyce said the only trade he hasn’t received the minimum three contractors in is acoustic ceiling, and therefore the bidding process will be open to any certified ceiling contractor, with no pre-qualification necessary.

Thursday evening was also an opportunity for the committee to meet with interior and architectural designers from Tecton Architects to review its design proposal for the interior of the structure.

Interior Designer Shannon Hickey walked the committee through the materials and colors proposed for each room in the station, from the kitchen area to the apparatus bays. Generally speaking, the color palette contained neutral colors with accents of red, intended to match the red of the fire engines.

Hickey described the proposed design of the entrance to the station, which features a black and white graphic, opposite a red historical timeline.

“We want this to feel neutral,” she said. “We want you to be guided to the museum area.”

Fire Station Building Committee member David Singer asked the design team to explain how they maintained a balance of high-quality material and affordability when selecting their design choices.

“The approach, as we design this building, is not just meeting functional and programmatic requirements, but it’s also thinking about the longevity of the building,” Pacheco responded. “We’re looking at durable materials. … For example, we’re not using plastic cabinets; we’re doing wood cabinets with cork surfacing. It needs to hold up to all of the wear and tear this building is going to receive over the next 50 to 75 years, maybe even longer, that it’s going to serve the community.”

Swapping a “middle of the road finish” for the cheapest option wouldn’t result in a major cost savings, she said, but it would have a significant impact on maintenance and durability.

Hopkins added that throughout the interior plans, the same few material choices are used, which she expects will help to “simplify supply chain issues.”

Fire Station Building Committee Chair Butch Hawkins added that at the end of the day, “the budget is the driver.”

“We’ve had to reduce several times to get to where we’re at,” he said.

After a review of the latest cost estimate for the new fire station, the committee voted to transfer the $615,000 allocated for furniture, fixtures and other expenses into the construction budget, which now totals $12.1 million.

Hopkins and Hickey told the committee they will have the final design proposal prepared and presented in a digital format for the committee’s meeting in April. A physical board with materials will later be sent to the temporary fire station for viewing.