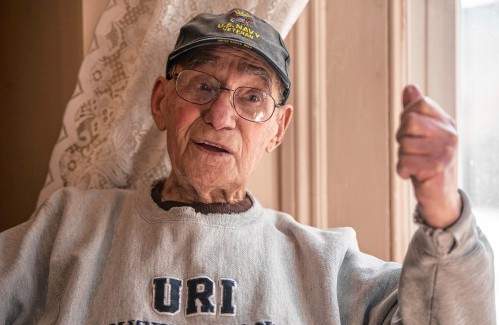 NORTHAMPTON — Last week, Albert F. Cadette renewed his driver’s license. About a year ago, he ended his half-century subscription to National Geographic magazine because he now finds the print is too small to read. After turning 100 on Friday, Cadette, sitting at home in a comfortable chair, near a window with a view of East Street, remarked that he feels like he’s “getting old.”

He showed a reporter his vast collection of National Geographics, dating back all the way to April 1916, that he and family members have gathered over the course of a very long lifetime. The issue released the month he was born, March 1922, features an article written by Alexander Graham Bell, inventor of the telephone, who died just five months after the issue’s publication.

Cadette also has a collection of unopened Puerto Rican rum, at least 30 years old, that he accumulated over the course of 26 cruises with his wife, Mary. Cadette said he was “never much of a drinker,” but he liked to have highballs with his old U.S. Post Office co-workers, a crew of six married couples affectionately called the Dirty Dozen, in the ’70s and ’80s.

In 2019, Mary died in hospice at home, the same house where she and Albert had lived since 1950. They were married for just shy of 70 years and had three children together.

Joe Cadette, 63, said his father has lived “a full life, and it’s a varied life,” and that he and Mary “did all the things you do for the American Dream.”

Albert said, “I took her places I had been that I wanted her to see,” using his experiences in the U.S. Navy during World War II as a travel guide.

At age 10, Cadette’s family left Holyoke amid the Great Depression and returned to their native Portugal, where they lived for nine years before coming to Northampton.

“It was tough. There was hardly any work then, which was in 1932,” Cadette said. “I went to school there in Portuguese. … It comes 1941, about August, I finally got my passport from the U.S. I got home, just short of the start of the war.”

During the family’s decade overseas, Cadette cultivated his love for the U.S. Navy and kept his English skills sharp by watching American movies in Lisbon theaters. He enlisted in the Navy five months after returning to the U.S.

He still speaks Portuguese fluently and subscribes to the Portuguese-language newspaper Luso-Americano, based in New Jersey. Joe Cadette said that on Wednesday, the newspaper plans to feature Albert in a story about his 100th birthday.

Albert Cadette is part of a vanishing population of World War II veterans. The U.S. Department of Veterans Affairs estimates that 16 million Americans served in the war, of whom only 240,000 were alive as of September. About 234 World War II veterans are estimated to die every day.

During the war, Cadette served on ships including the USS Parker, the USS Saturn and the LST-578. An assignment to a reinforcement convoy off the Philippines nearly took his life when a Kamikaze pilot took aim at the LST-578; Cadette was manning a 40mm gun position as an ammunition loader.

The gunner shot down the Japanese suicide pilot and the plane crashed into the ocean just yards from the American ship, he said.

“I came within this from dying,” he said, holding a thumb and forefinger so close they were almost touching. “That’s the closest I ever came to death.”

His ship earned three battle stars for service in the Leyte Gulf, Lingayen Gulf and Mindanao Island landings. He served in both the Pacific and Atlantic theaters, earning two personal citations for service, and participated in Operation Torch, an Allied assault on French Morocco.

Military service also brought Cadette up and down the East Coast, throughout the Caribbean and down to Brazil.

During a reinforcement convoy out of Hollandia, New Guinea, Cadette’s ship encountered engine trouble in port and lagged one day behind the rest of the convoy. When they caught up, their sister ship, the LST-577, had taken their planned position. The LST-578 found a different position and, the next morning, the LST-577 was sunk by a Japanese tornado.

“That would have been my other death, right there,” Cadette said.

He returned from duty in 1945 or 1946, and when he was finally standing onshore on the coast of California, he said he bent down and kissed the ground.

The secret to Cadette’s longevity is anyone’s guess, but he credits a lifetime of staying physically active. Over the years, he made significant renovations to his house, including lowering the 9½-foot ceilings, and in his 60s, he planted 52 apple trees on family-owned farmland near the Northampton Airport.

Asked why he planted so many apple trees, Cadette said, “Because I wanted apples.”

Cadette retired in 1982 after spending 30 years as a letter carrier for the Postal Service. Before that, he worked for 14 years at Hampshire Lumber.

He said he doesn’t eat junk food except for a few potato chips every now and then, but otherwise doesn’t pay special attention to his diet. Nearly half a century ago, Cadette quit his 30-year smoking habit, which had him puffing more than two packs a day. He’s beaten cancer once already.

At 92, Cadette went to the doctor with hip pain but said he didn’t want a hip replacement so late in life.

“Oh, I wish to hell I did have it,” he said, “because now I have problems. … Sitting down, I’m fine, no pain. It’s the walking that bothers me.”

Still, until last April, he kept up with the yard work and regularly raked his own leaves.

State Rep. Lindsay Sabadosa, D-Northampton, sent Cadette a certificate marking the occasion of his 100th birthday, along with a letter of congratulations that expressed regret she could not visit him in person. Asked how he planned to spend his birthday, Cadette said he was having a party this weekend.

“Did he want anything big?” Joe said. “No, he just wanted the family together.”

Everyone Needs An Inspiring Marvel Quote To Live By, So Make A Tasty 5-Course Meal For A Friends' Dinner