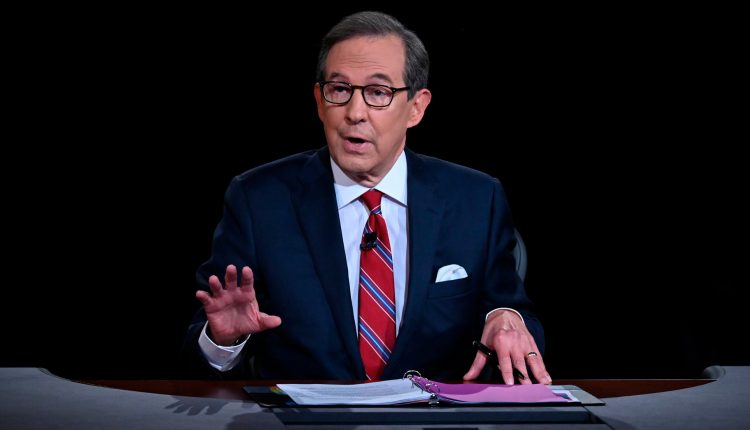 “I just no longer felt comfortable with the programming at Fox.”

Chris Wallace uttered those words matter-of-factly, in between bites of a Sweetgreen salad at his new desk inside the Washington bureau of CNN, the network he joined in January after nearly two decades at Fox News.

For those on the left who admired him and those on the right who doubted him, it’s a statement that was a long time coming.

A down-the-middle outlier at Fox News who often confounded conservatives by contradicting the network’s right-wing stars, Wallace was also one of the channel’s fiercest defenders, disappointing liberals who hoped he might denounce colleagues like Sean Hannity and Tucker Carlson.

But in December, Wallace, 74, issued a final verdict: He was done. In a surprise move, he declined to renew his contract as host of “Fox News Sunday” and jumped to archrival CNN. His daily interview show — “Who’s Talking to Chris Wallace?” — starts Tuesday on the new CNN+ streaming service.

So why did Wallace change the channel?

“I’m fine with opinion: conservative opinion, liberal opinion,” Wallace said in his first extensive interview about his decision to leave. “But when people start to question the truth — Who won the 2020 election? Was Jan. 6 an insurrection? — I found that unsustainable.

“I spent a lot of 2021 looking to see if there was a different place for me to do my job,” he added.

The anchor was eager to describe what attracted him to his new gig: excitement about CNN+, the more freewheeling format of streaming TV — “I don’t have to say, you know, ‘Wolf Blitzer starts right now at 6:59:59’ ” — and the opportunity to expand beyond politics. In early episodes, he discusses space travel with “Star Trek” actor William Shatner, asks former Disney boss Bob Iger about meeting the pope and at one point sings a warbling duet with songstress Judy Collins.

But Wallace also acknowledged that he felt a shift at Fox News in the months after Donald Trump’s defeat in 2020 — a period when the channel ended its 7 p.m. newscast, fired the political editor who helped project a Trump loss in Arizona on election night and promoted hosts like Carlson who downplayed the Jan. 6 riot.

He confirmed reports that he was so alarmed by Carlson’s documentary “Patriot Purge” — which falsely suggested the Jan. 6 Capitol riot was a “false flag” operation intended to demonize conservatives — that he complained directly to Fox News management.

“Before, I found it was an environment in which I could do my job and feel good about my involvement at Fox,” Wallace said of his time at the network. “And since November of 2020, that just became unsustainable, increasingly unsustainable as time went on.”

Still, he acknowledged that some viewers may wonder why he did not leave earlier.

“Some people might have drawn the line earlier or at a different point,” he said, adding: “I think Fox has changed over the course of the last year and a half. But I can certainly understand where somebody would say, ‘Gee, you were a slow learner, Chris.’ ”

Wallace said his new CNN+ series, which airs at 6 p.m. Mondays through Thursdays, was inspired by the work of famed interviewers like Larry King and Charlie Rose. (His father, “60 Minutes” legend Mike Wallace, hosted a versatile interview program of his own in the late 1950s, with guests ranging from Henry Kissinger to actress Jean Seberg.)

The set of the show is sparse, just Wallace and a guest sitting on either side of a Plexiglas table — a more brightly lit version of Rose’s long-running PBS format. Wallace said he hoped “to have the kind of intimate, thoughtful conversation where we forget we’re on camera in a studio.”

The service, which costs $6 a month, debuts Tuesday, years after the arrival of streaming competitors like Fox Nation and the CBS News Streaming Network. CNN executives view it as a major effort to gain a foothold with viewers who are abandoning cable subscriptions in favor of online alternatives for news.

The stakes are high for CNN, which is undergoing wrenching change. The channel’s parent company, WarnerMedia, is expected to be acquired by Discovery Inc. in the next few weeks. A new president, Chris Licht, is taking over CNN after the network’s longtime leader, Jeff Zucker, resigned in February over an undisclosed relationship with a colleague.

Wallace allowed that he was “obviously unhappy” that Zucker, the man who hired him, was forced out in a corporate scandal just weeks after he joined up.

Wallace is best known for his political expertise — he moderated two presidential debates, served as NBC’s chief White House correspondent and is an equal-opportunity griller of Democrats and Republicans — but he now plans to graze on other topics, including sports and the arts. Interviewing Collins, he chimes in with a few lyrics from her 1975 hit, “Send In the Clowns.”

“I wanted to get out of politics,” Wallace said, adding, “Doing a Sunday show on the incremental change from week to week in the Build Back Better plan began to lose its attraction.”

He demurred when asked about recent opinions expressed by Carlson and other Fox News commentators about Russia and Ukraine.

“One of the reasons that I left Fox was because I wanted to put all of that behind me,” Wallace said, adding that since his exit, “there has not been a moment when I have second-guessed myself about that decision.”