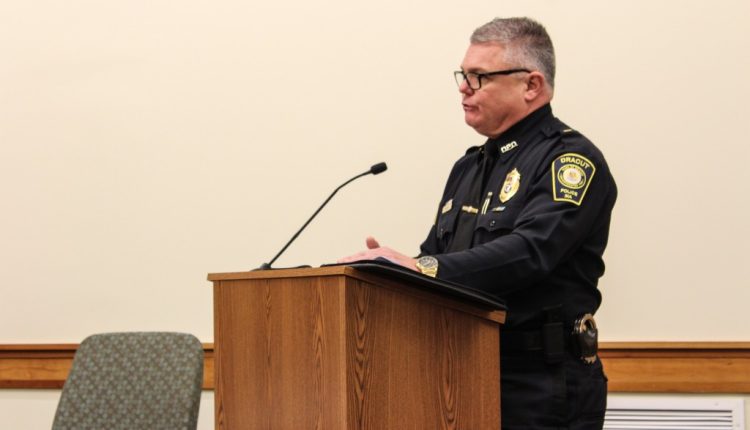 DRACUT — Police Chief Peter Bartlett is about to take a second leave of absence in two years for medical reasons, according to members of the Board of Selectmen.

“I have not received any official paperwork from the chief as of yet, you will have to reach out to him,” said Town Manager Ann Vandal.

The Sun has reached out to the chief, but he has not responded. Bartlett was out of work for seven months in 2020 due to injuries sustained on the job.

Selectmen Jesse Forcier and Joe DiRocco confirmed the report that Bartlett plans to take a second leave of absence.

The Sun has learned Bartlett does not want to be away from his job for too long, and his second leave will be a matter of weeks rather than months.

The police chief’s often-troubled tenure in Dracut has been marked by conflicts with town officials and the police union.

Bartlett fell while on duty in February 2020, injuring a shoulder, arm and hip. He continued working through much of May, but announced then that he was going on injured reserve under the guidelines of a state law that guarantees police, firefighters and emergency personnel full pay without any withholdings.

His decision to go on injured reserve coincided with a vote of no-confidence from 90% of the police force, and the selectmen voted to delay renewing his contract.

The chief said he sought to return to work in July on light duty. That was denied, he said.

After trying to get an answer from him in October, Vandal notified the selectmen that she was removing Bartlett from injured reserve and placing him on administrative leave.

Discussions reportedly occurred between his lawyer and the town’s lawyer. Bartlett is reported to have asked for a monetary settlement with the town in exchange for his departure. Selectmen determined the proposed settlement was unaffordable.

Bartlett later file a complaint with the Massachusetts Commission Against Discrimination claiming the town did not bring him back to work in a timely and medically appropriate manner. The Sun has reached out to Beth Myer of the Boston law firm Burns & Levinson, who was the chief’s lawyer at the time the complaint was filed.

On Sept. 15, an arsonist torched one police cruiser behind police headquarters and the fire spread to a second, destroying both. The police station was unstaffed because officers were responding to multiple emergency calls. Selectmen questioned the chief about the station being unattended. Bartlett explained it was due to staff shortages.

In addition to these issues, in September 2019 controversy erupted when then-Town Manager Jim Duggan awarded a contract for a security fence around the police station to a Hooksett, N.H., contractor rather than a Billerica contractor. The Hooksett vendor bid $39,000 for the work, but the Billerica vendor bid $31,000.

Bartlett lives in Hooksett and was the police chief there before coming to Dracut in 2017.