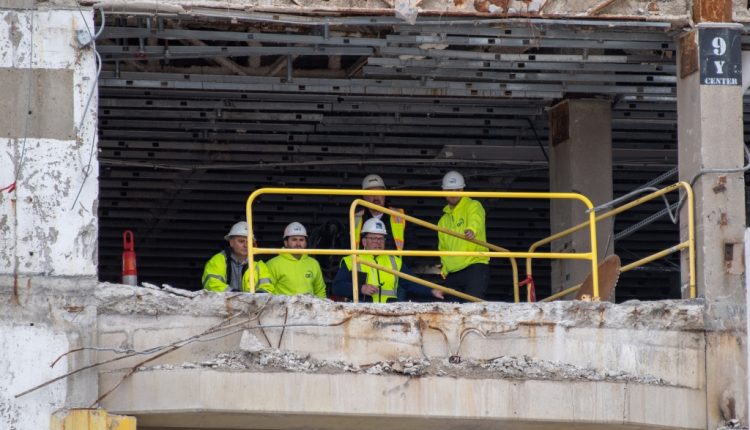 The brother of the man killed when a portion of the Government Center Garage collapsed while he was working on it said Peter Monsini was a single dad who knew what he was doing in the demolition trade.

“It’s definitely very tragic, and nothing we ever expected. Pete’s been doing this since he was 10 years old. He grew up in my father’s family business,” Hal Monsini told the Herald Sunday.

Peter Monsini, 51, of South Easton, was pronounced dead by responding emergency crews Saturday around 6 p.m., shortly after crews were dispatched to a report of an accident at Congress Street near Haymarket Square.

Hal Monsini said that his brother was a good, hardworking family man who worked to provide for his 18-year-old son, Anthony Monsini. Peter Monsini was a single father, his brother said.

“Pete was a great guy, a good family man. The only reason he worked was to provide for his son and to get him through schooling. My brother worked for him to make his life better,” Hal Monsini said. “Anthony is devastated.”

The brothers both worked in demolition, not construction, according to Hal Monsini, after having inherited the trade from their father, who had learned it from his father. The family has done demolition since the ’30s.

“My father ran a company called Hercules Demolition out of Brockton until he retired six or seven years ago,” he said. “His two sons stayed in the business.”

Hal Monsini said that to a lay person, demolition may seem a particularly dangerous line of work but that it generally isn’t if you know what you are doing.

“It has its dangerous moments. But if done correctly it’s a job like anything else,” he said. “My brother, if he thought he was unsafe, he would not have been on that roof, he would have come down.”

Hal Monsini said that both of their parents are still alive and struggling to grapple with the sudden loss of their son.

“We’ve been fortunate enough to never have a major incident in all the years we’ve worked in this business,” Hal Monsini said. “Until now.”

“I can’t even believe I’m writing this…My cousin Peter Monsini and I were the best of friends from early childhood to early 20s. We bought cars together, met girls together, took big risks together,” Peter Monsini’s cousin Rich Monsini said in a public Facebook post.

According to Rich Monsini, he was performing at a live concert when the accident occurred.

“I made a toast to life last night, it was around the same time this happened,” he said. He was still unaware of the accident.

“I told the crowd to hug your loved ones because you never know.”

Sister-in-law Jennifer Monsini said Peter will be missed by a family that loved him.

“We are absolutely devastated this morning with losing my husband’s brother to this horrible accident last night. He will be greatly missed by his family, myself and especially my children who adored him,” she said in a public posting.

Hal Monsini said his brother was not a regular on the Government Center garage project, but was a member of the union working there and had been called in for the job recently.

The Recorder – And then what happened?: Nancy Garvin kept our eyes on the right page in history