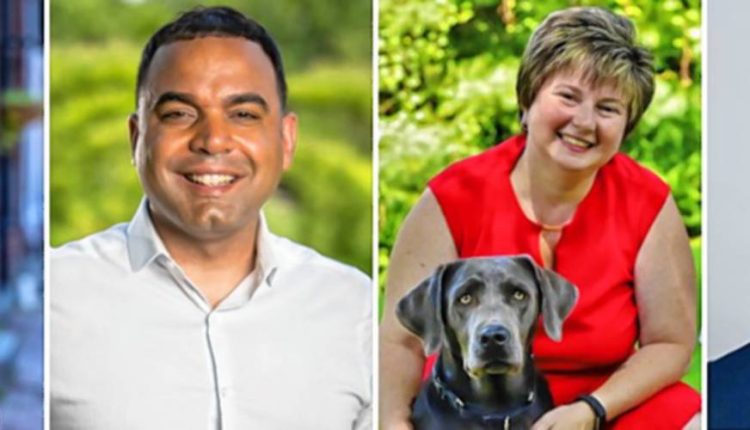 BOSTON — What does it take to make a mayor?

A few succinct lines are hardly enough to sum up the job description. And while previous involvement in local government can help, there’s no four-year degree, bootcamp or checklist that can fully prepare someone for the day-to-day work of running a city.

“Nobody knows how to be the mayor until you’re the mayor,” Gloucester Mayor Greg Verga said. “There’s no manual, and no matter what your previous experience was, it is a new job.”

Eleven of the 34 Massachusetts mayors elected in November are occupying their city’s executive office for the first time, and the News Service spoke with four of these new leaders in late 2021 about their priorities and expectations for the role. In the months since, they have been working with transition teams, filling out staff rosters and meeting with constituents about the community’s needs.

Their first weeks and months in office could easily be characterized by the term “information overload.”

“It was like drinking water out of a — what do they say, a firehose?” Holyoke Mayor Joshua Garcia said. “Definitely a lot of information and a lot of things were being thrown at the office. But, again, it wasn’t anything that I wasn’t already prepared for.”

Garcia said he’s benefited from previous experience as a Blandford town manager and Holyoke School Committee member. But one thing he didn’t have in those positions was dedicated staff working in specific subject areas, which can make all the difference for a new municipal executive getting up to speed.

The mayors agreed that relying on institutional knowledge of longtime staffers has been essential. This was especially true in January, as cities and towns grappled with the pandemic’s omicron spike and a blizzard that left some communities with more than two feet of snow.

Verga said Gloucester saw a major snowstorm in each of his first five weeks in office.

“That was an interesting trial by fire — or trial by snow — to prepare for the process. But like I said, the people who have been here, they knew what to do,” Verga, a former city councilor, said. “We were ready for action days before the storm.”

Lynn Mayor Jared Nicholson, who previously served on the city’s school committee, said that with the omicron wave receding, his team has been focused on gathering community input around how to spend its remaining allocation of American Rescue Plan Act (ARPA) funds. He’s been especially grateful for the advice offered by his predecessor, Thomas McGee, as well as the outgoing mayor’s chief of staff, who stayed on for several months to help with the transition.

“Right off the bat, we worked really hard to start developing relationships, not only with the folks that we were working with day to day in City Hall, the other departments, but also our counterparts” on the City Council and in the State House, Nicholson said.

Garcia called this period of his term the “connecting phase,” with the goal of creating open lines of communication, understanding the culture and environment at City Hall and setting his administration’s expectations going forward. As part of this process, he has established seven advisory councils around issues such as housing, economic development and community collaboration, with more than 150 residents participating.

If Garcia could pass on advice to future mayoral candidates, he would urge them to make sure they have their family’s support before deciding to run for office. He said his own family has been incredibly encouraging, but there will inevitably be give and take between home and work.

“The greatest challenge has been balancing professional and personal life. I’m married with two children, and a third under our guardianship, and I’m here at 7 in the morning, and I’m leaving, I’m not getting home till 9 o’clock at night,” Garcia said. “And so that’s number one, making sure you have that endorsement.”

North Adams Mayor Jennifer Macksey agreed that time management can be difficult, noting she often works into the small hours of the morning. Her team’s focus over the past few months has been to identify and prioritize the city’s greatest needs, and with a list that seems never-ending, she said the late nights come with the territory.

“It’s been eye opening — eye opening in the sense of really, what are the true needs of the community? As you know, I have a municipal background, I have a big background in education,” said Macksey, who previously served as the city’s director of finance, treasurer, tax collector and CFO. “But when you’re sitting in the seat, and you see everything that needs to be done, from education, to infrastructure needs, to social services needs, to public safety, to rebuilding neighborhoods, you kind of pause.”

Macksey’s favorite aspect of the job is the chance to work directly with people, and she hopes to emphasize community feedback as much as possible. She’s recently held focus groups to get input on a planned rehaul of the city’s historic Mohawk Theater, and one of her goals is to make sure that every resident who calls her office receives a personal call back, either from Macksey directly or from one of her staff.

The process of settling in and getting started has been all about hands-on learning, she said.

“I think if you look back at the first 60 days, I’ve been in the weeds, I really have. And I admit that,” Macksey said. “So I’m looking forward to establishing my team, getting everybody used to having Jennifer Macksey back in City Hall. They refer to me as the whirlwind that goes through the hallway.”

For Nicholson, it’s been pleasantly surprising to see how Lynn has welcomed his administration. As he trains his eye on economic development and growth, especially in the life sciences sector, he feels like he has the community’s backing.

“I’ve been really encouraged by the support that we’ve received. It feels like a lot of folks are rooting for us, rooting for the city, and even folks with whom we may have had policy disagreements in the past,” Nicholson said. “The reception so far has been really positive in that way.”

Similarly, Holyoke’s Garcia noted that several of his previous political opponents are now serving on city advisory councils. And for mayors, he said being able to see other community leaders as teammates rather than adversaries is an essential skill.

“You have to be able to get past the politics and the rhetoric and understand that when you’re working in local government, it’s about taking care of your neighbors, no matter what the perspectives are (that are) different than yours,” Garcia said. “The community, we have to co-exist and we have to work together to address the community challenges.”

PHOTOS: One knot at a time

Making of a mayor | News

AI programs can tell race from X-rays, but scientists don’t know how.…

AI programs can tell race from X-rays, but scientists…