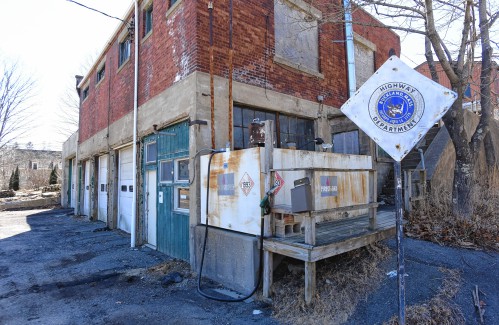 BUCKLAND — Considering the future of the former Highway Garage at 50 Conway St., residents pitched ideas to implement affordable housing, create a performance space or children’s center, or welcome a retail or industrial business during a forum Thursday.

The land, garage and two outbuildings served as the Highway Garage from the 1930s until 2008. It was abandoned due to structural integrity issues, according to Town Administrator Heather Butler. The Highway Department has a new facility at 2 Sears St.

Now, the town wants to sell the 50 Conway St. property and make “productive use” of the space.

“I don’t believe that there’s any intention to maintain this as a town-owned parcel,” Butler said, speaking from past conversations with the Selectboard.

“We are looking at this as an economic development opportunity,” Selectboard Chair Barry Del Castilho said. “There’s nothing that’s off the table at this point.”

The 0.36-acre parcel sits at the corner of Conway and North Elm streets and has access to electricity, cable, broadband, and public water and wastewater systems. The garage building is in poor condition, according to FRCOG, and a hazardous building materials assessment will likely be needed prior to redevelopment or demolition.

The Village Residential Zoning District where the property is located allows for residential, business and industrial uses, including single-family or two-family homes, restaurants, retail stores and manufacturing.

■“What would be the ideal use for this site?”

■“Is there something in the village that is missing that the reuse site could serve to fill?”

■“What is your biggest concern for the future reuse of this site?”

A survey with the same questions will be sent to residents for additional feedback.

Resident Karen Sheaffer expressed her strong support for the construction of affordable housing.

“I can’t say enough about the people who have been basically driven out of the town because they can’t afford to live there,” she said.

“No. 1 — low-income affordable housing,” Deborah Yaffee said. “That would be my vote.”

Raymond Lanza-Weil said he supports the idea of affordable housing in general, but suggested the site may not be feasible for it. The aesthetics of the property and potential cleanup needs were cited by others as housing concerns.

Atwood’s presentation included data from the U.S. Census Bureau and Massachusetts Association of Realtors about the town’s household income levels and housing costs. The median sale price for a single-family home in Buckland was more than $300,000 in 2021, and prices are consistently higher than in Franklin County overall.

Other attendees shared their vision of the site as a community gathering space. Carmela Lanza-Weil, a theater creator and teacher who lives near the property, said she sees the potential for a community performance center for music, theater and dance, which would “really build on the idea of Shelburne Falls as an arts center.”

“I would really love to see it become something,” she said, “because right now, it’s an eyesore and it’s depressing.”

“Whatever is developed, it’s got to fit … in a way that makes sense to the overall use of the area,” Raymond Lanza-Weil said.

Resident Jocelyn O’Shea suggested the site become a community space for children, something she said the town is lacking.

Using the space for retail or industrial purposes would create jobs in the community, resident Sharin Alpert proposed, adding that she would like to see “something clean and unpolluting that can pay a living wage.”

“I’d like to see it be something that benefits the people that already live here rather than the well-off people from out of town,” she said.

Residents also expressed concerns about the effect of a new development on the neighborhood, specifically potential noise and parking issues.

FRCOG’s survey — available online at bit.ly/3qAOONm — seeking ideas for 50 Conway St. will conclude in mid-April, and a follow-up meeting will be held in May to present development options.