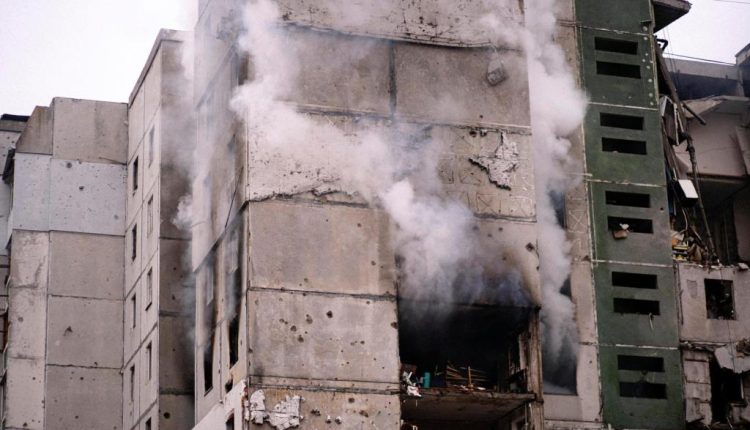 LVIV, Ukraine (AP) — Ukrainian President Volodymyr Zelenskyy accused the West of cowardice as his country fights to stave off Russia’s invading troops, making an exasperated plea for fighter jets and tanks to sustain a defense as the war ground into a battle of attrition.

Speaking after U.S. President Joe Biden said in a lacerating speech that Russian President Vladimir Putin could not stay in power — words the White House immediately sought to downplay — Zelenskyy lashed out Sunday at the West’s “ping-pong about who and how should hand over jets” and other weapons while Russian missile attacks kill and trap civilians.

Ukraine’s ambassador to the U. S., Oksana Markarova, said on NBC’s “Meet the Press” that her country had heard Biden “loud and clear.”

“Now, it’s all up to all of us to stop Putin while it’s still local in Ukraine because this war is not only about Ukraine,” she said, but “an attack on democracy.”

Russia’s invasion of Ukraine, now in its 32nd day, has stalled in many areas. Its aim to quickly encircle the capital, Kyiv, and force its surrender has faltered against staunch Ukrainian resistance — bolstered by weapons from the U.S. and other Western allies.

Zelenskyy signed a law Sunday that bans reporting on troop and equipment movements that haven’t been announced or approved by the military. Journalists who violate the law could face three to eight years in prison. The law does not differentiate between Ukrainian and foreign reporters.

Britain’s Defense Ministry said Russia’s troops are trying to encircle Ukrainian forces directly facing the two separatist-held areas in the country’s east. That would cut the bulk of Ukraine’s military off from the rest of the country.

Moscow claims its focus is on wresting from Ukraine the entire eastern Donbas region, which has been partially controlled by Russia-backed separatists since 2014. A high-ranking Russian military official said Friday that troops were being redirected to the east from other parts of the country.

The leader of one separatist-controlled area of Donbas said Sunday that he wants to hold a vote on joining Russia, words that may indicate a shift in Russia’s position. Leonid Pasechnik, the head of the self-proclaimed Luhansk People’s Republic, said it plans to hold a referendum on becoming part of Russia “in the nearest time.”

Russia has supported the separatist rebels in Luhansk and neighboring Donetsk since an insurgency erupted there shortly after Moscow annexed the Crimean Peninsula from Ukraine in 2014. In talks with Ukraine, Moscow has demanded Kyiv acknowledge the independence of Donetsk and Luhansk.

Kyrylo Budanov, the head of Ukrainian military intelligence, accused Russia of seeking to split Ukraine in two, like North and South Korea.

“So, who is in charge of the Euro-Atlantic community? Is it still Moscow, thanks to its scare tactics?” he asked. “Our partners must step up their aid to Ukraine.”

His plea was echoed Sunday by a priest in the western city of Lviv, which was struck by rockets a day earlier. The aerial assault illustrated that Moscow, despite assertions that it intends to shift the war eastward, is willing to strike anywhere in Ukraine.

“When diplomacy doesn’t work, we need military support,” said the Rev. Yuri Vaskiv, who reported fewer parishioners in the pews of his Greek Catholic church, likely because of fear.

Referring to Putin, he said: “This evil is from him, and we must stop it.”

A chemical smell lingered in Lyiv on Sunday as firefighters trained hoses on flames and black smoke poured from oil storage tanks hit in the attack.

A security guard, Yaroslav Prokopiv, said he saw three rockets destroy two oil tanks but no one was hurt.

In his video address, Zelenskyy angrily warned Moscow that it was sowing a deep hatred for Russia among Ukrainians.

While Russia’s advance on Kyiv remains stalled, fighting has raged in the suburbs, and blasts from missiles fired into the city have rattled the St. Sophia Cathedral, a 1,000-year-old UNESCO world heritage site that is the heart of Ukrainian spiritual and national identity.

Vadim Kyrylenko, an engineer and conservator who is the most senior manager remaining at the church, said a strike nearby “would be a point of no return for our landmark because it is very fragile and vulnerable.”

Pointing at the cathedral’s golden domes, Kyrylenko said the cross atop the central one toppled a month before the outbreak of World War II.

“The cross on the left fell a month before this war,” he said.

Your Fast Food Opinions Reveal How Old You Are