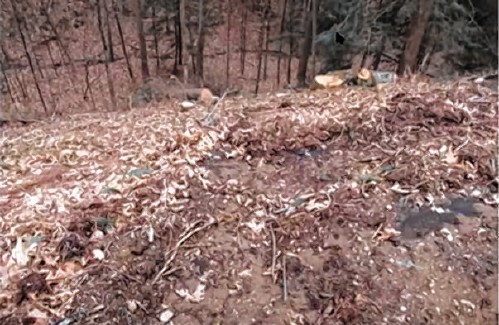 AMHERST — A South Hadley developer who cleared numerous trees from two building lots in an Amherst subdivision, possibly compromising a wetlands area, will be required to undertake a series of corrective actions before homes are constructed.

The Conservation Commission, in a 6-0 vote on Wednesday, ordered that Dan Luis Builders submit, by April 8, a plan for stabilizing a slope affected by the removal of trees from lots at the cul-de-sac formed at the end of Kingman Road and Tuckerman Lane.

Commission Chairwoman Jenn Fair said the enforcement order will ensure there is no degradation of water resources after the tree removal was done within 100 feet of a bordering vegetated wetland and an intermittent stream, violating the town’s wetland bylaw and the state’s Wetland Protection Act.

The order stipulates that native plantings be put on the slope, that trees be replaced with a mix of hardwoods and softwoods similar to what previously existed, that stumps stay in place and that a clearly delineated boundary mark the 100-foot buffer.

Restoring the land is the goal, she said.

“We’re doing everything we can to protect the resource,” Fair said. “We’re using the best tools we have to try to get this sorted out.”

The order came after Luis filed an after-the-fact request for determination of applicability for the property, and the commission issued a negative determination. That decision came after Luis moved the building envelope for the homes to be outside the 100-foot buffer.

“Now that the project is out of that 100-foot buffer, it’s not jurisdictional for us,” Fair said.

The order also asks for an accounting of how many trees were cut within the 100-foot buffer and the size of those trees.

Commission member Lawrence Ambs said the order should specify that small trees will not be acceptable as replacements. “We’re not saying put back a shrub for a 2-foot diameter tree,” Ambs said.

Wetlands Administrator Erin Jacque, who is drawing up the order, said the tree removal meant a lot of big root systems have been lost, and grass will provide some stability.

Prior to the vote, Erica Larner of Larner Consulting, who is working for Luis, said that her client doesn’t have to comply with an enforcement order since the request for determination already spells out that reseeding of the slope will be done.

Larner said that because the building lots are now considered non-jurisdictional, the enforcement order is not valid. “I’m so sorry folks, but you just determined it was not jurisdictional,” Larner said.

The commission’s decision came after earlier in March it received numerous complaints from nearby residents about the tree removal, including that the foundations of homes are shaking due to the trees no longer shielding trains from the railroad tracks.

“That was a resource the whole neighborhood used,” said Amber Cano-Martin of Grantwood Drive.

The trees were home to owls and whippoorwills, said Brenda Bushouse of Tuckerman Lane, adding that it will be difficult to re-create that environment after the removal of so many trees.

Jacque said residents who are concerned with the future development may have to speak with the town’s building department, since the Conservation Commission’s role is limited to impacts on wetlands..

Charlie Schweik, also of Tuckerman Lane, said he appreciated what the commission did.

“Thank you to the commission and for everyone in the meeting for their efforts on this, it’s greatly appreciated,” Schweik said.