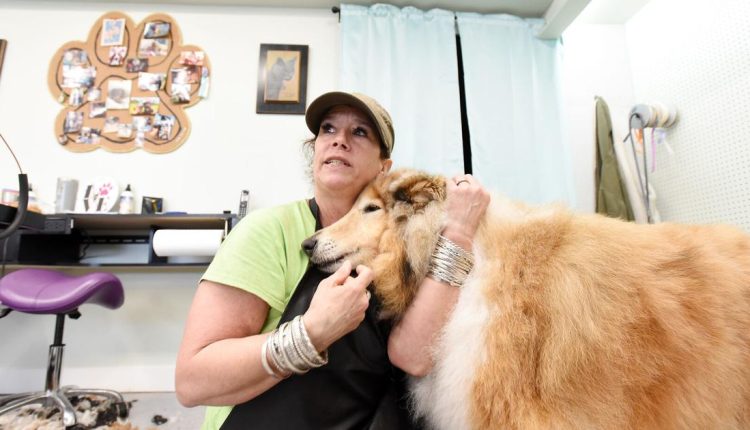 Until a couple of weeks ago, the now bright and cheery Robyn’s Dog Grooming at 388 Main St. was looking a bit long in the tooth.

The self-employed owner, Gloucester native Robyn (Clayton) McNair — a.k.a. one of the Crazy Hat Ladies of St. Peter’s Fiesta — admits her shop looked tired. The front windows had rotted out and two panes were broken. Nine lights were out inside.

She used an old purple clawfoot bathtub to wash dogs, which required her to lift them in and out, something she described as “brutal.” Her grooming table was a converted barber’s chair.

“I knew how much it was going to cost,” said McNair of a shop makeover. She has been in business 36 years, but now she is single, having lost her husband of almost 30 years to pancreatic cancer seven years ago.

That cancer fight took its toll. She took a lot of time off from work to care for him, and had a kid in school getting ready to go to college. Her son is 25 now. She also cares for two Labrador retrievers, a 12-year-old Chihuahua and a couple of horses, plus she has a home and a shop to keep up.

“I have the best spot in town,” McNair said of her updated shop last week. “I’ve been very fortunate, but this was not what this place looked like. It was a run-down drug store that I made do with because sometimes you have to just make do.”

Earlier this year, long-time customer and friend Audrey Donovan of Rockport, and friend Ronald Goulart, owner of A-1 Maintenance and Carpet Cleaning of Gloucester, decided they wanted to help McNair fix up her shop.

Through a GoFundMe page, Donovan raised nearly $11,600 from 155 donors, and Goulart enlisted an army of local contractors who donated their labor or materials or both, or supplied equipment and materials at cost.

McNair’s fiancé, Donny Wilt, and she spent time after work doing much of the prep work until midnight. The month-long makeover wrapped up two weeks ago, and McNair threw a party for the contractors at the shop on Wednesday. McNair estimates the job would have cost her $20,000 out of pocket.

McNair now has a new grooming table with an electric lift, walls painted a bright shade of purple, a new stainless steel dog grooming tub and a knee wall to separate the front of the shop from the back.

McNair said it was Donovan who first approached her about fixing up the place.

“I said to her, ‘I want you to have a new journey’,” said Donovan, who has known McNair for more 40 years and said McNair has groomed 11 of her dogs. She knew McNair’s shop was in decline, given her husband’s death and the impact of the COVID-19 pandemic. Donovan said she told McNair she had never posted a GoFundMe page before, “but I want to do something for you because the community loves you and I think they would rally around you.”

When Donovan called Goulart about what she was up to, he knew who to call.

“I wanted all the guys who had big hearts,” said Goulart, who said he went to school with McNair’s late husband, John.

“She’s just a good solid human being,” he said of McNair, who groomed his late dog.

“The contractors were calling me thanking me for asking them, that’s a big deal. It’s just a part of Gloucester,” said Goulart, whose company refurbished the shop’s floors.

Among those who worked on the job or supplied materials and equipment were:

Giacalone said he got a call from Goulart about the GoFundMe page.

“He told me the situation — the poor girl needed help,” Giacolone said. “She needed help and I was capable of helping her.”

It’s an example of Gloucester residents helping one another, he said.

“So, when this project got started, I really didn’t know what to expect, to tell you the truth,” McNair said. “I was so overwhelmed I cried for two weeks.”

The work is not entirely done. A woman who lives next to the shop, known to McNair only as “Georgie,” is painting a mural in the “Cancer Sucks in Every Color” corner of the shop where McNair has a collection box; donations go to those going through cancer treatments.

For seven years, McNair and a friend have been raising money for their “Cancer Sucks Fund.” She has raised about $14,000 by cutting dogs’ nails for a donation.

On Saturday, April 2, McNair plans to hold a “Cancer Sucks in Every Color” fundraiser, which will also serve as a grand re-opening, from 9 a.m. to noon at the shop.