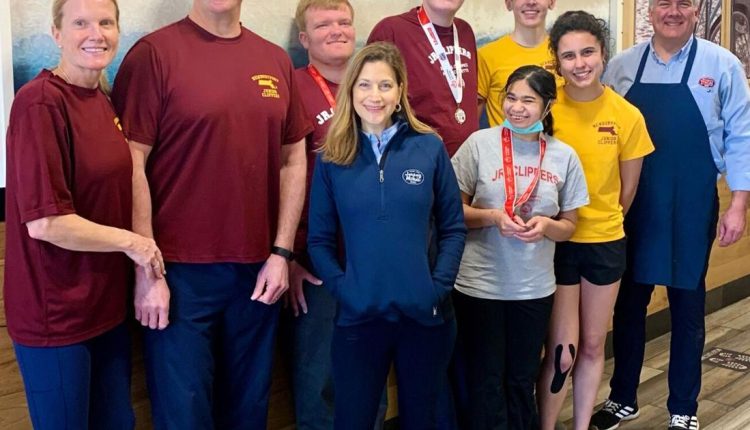 NEWBURYPORT — A national giving campaign will bring together the local chapter of Special Olympics, known as the Newburyport Junior Clippers, and the Jersey Mike’s sandwich shop on Storey Avenue this week.

Jersey Mike’s 12th annual nationwide Month of Giving Campaign culminates Wednesday when local franchise restaurants will give 100% of the day’s sales — not just profit — to the Special Olympics state programs and the 2022 Special Olympics USA Games.

This is the first time that Jersey Mike’s owners and operators across the country will support a single cause for the company’s March Month of Giving fundraising campaign.

Locally, the Newburyport Junior Clippers connected with Jersey Mike’s Newburyport owners and operators Kane and Kate Mosteller to see if the group could help out with the Day of Giving. Athletes, coaches and volunteers plan to be on site to greet customers, share their stories and thank people for their support of Special Olympics.

“When you sign up for Jersey Mike’s as a franchisee, you end up falling in love with this brand’s culture — the culture of giving,” said Kane Mosteller, who celebrated the one-year anniversary of the opening of Jersey Mike’s Newburyport this month.

Jersey Mike’s, the presenting sponsor of the 2022 Special Olympics USA Games in Orlando, hopes to raise even more for the nonprofit than the $15 million raised for various charities through last year’s campaign.

Mosteller says Jersey Mike’s finds strength in its numbers with more than 2,000 stores across the country.

“It’s that mission of making a difference in someone’s life,” he said, explaining how Jersey Mike’s instills this message in its team members.

Throughout March, customers have been able to make donations in the restaurant or through the Jersey Mike’s mobile app.

They have also been given the chance to round up the cost of their meal, which Mosteller said has been especially popular.

If a sub costs $9.25, for example, a customer could round up to $10 with the extra 75 cents benefiting Special Olympics.

Mosteller believed that the local shop had already raised approximately $1,400 from just that option.

On Saturday, Kim Spinney, program coordinator for the Newburyport Junior Clippers, and some of the local chapter’s coaches, athletes and volunteers stopped by Jersey Mike’s Newburyport to meet the owners and some of the team members ahead of the event.

“Knowing there are local athletes that will benefit from this on Wednesday has the team at my Jersey Mike’s really excited to get involved,” Mosteller said.

Spinney said her group was also excited to be able to meet people, show off their medals and share their stories.

The local program has approximately 30 athletes from the greater Newburyport area, ranging in age from 8 to 33 with varying intellectual disabilities.

On an annual basis, the program offers three sports: soccer, basketball and track and field.

Each of the athletes are support by a volunteer buddy, most of whom are students from Newburyport High School.

Spinney especially loves the dedication of these volunteers, noting that some students will volunteer for one season and end up staying for the year because they love the program so much.

These volunteers build relationships with the athletes, teach them about sportsmanship and help them grow in their athletic ability.

The COVID-19 pandemic has prevented Special Olympics from hosting the state summer games the last couple of years, so athletes, coaches and volunteers are especially excited to get back to competing in June.

“We’re really excited to get back to a more normal season,” Spinnery said.

Staff reporter Heather Alterisio can be reached via email at halterisio@newburyportnews.com or by phone at 978-961-3149. Follow her on Twitter @HeathAlt.

Pho So 1 Opens in Quincy Center