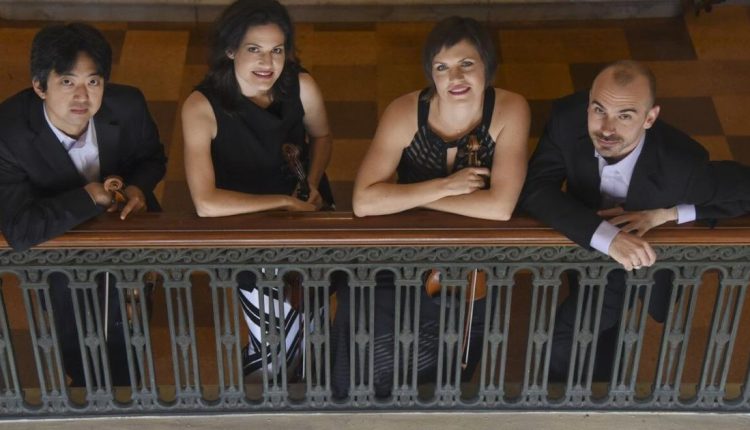 WENHAM — The Jupiter String Quartet, quartet-in-residence at the University of Illinois, will perform a concert of chamber music at Gordan College on Friday, April 1.

The Jupiter String Quartet is a family affair with violinists Nelson Lee and Meg Freivogel, violist Liz Freivogel – Meg’s older sister – and cellist Daniel McDonough, the younger Freivogel’s husband. In 20 years together, the ensemble has established itself as an important voice in the world of chamber music.

Haydn’s String Quartet in D Major showcases a clever interplay of the ensemble’s four instruments—a hallmark of the composer considered the “grandfather” of string quartet writing. The Jupiter Quartet – named for the most prominent planet in the night sky when they joined forces with an astrological symbol that resembles the number four – will follow the Haydn with a performance of Price’s complex and rich interpretations of popular folk tunes, where she also displays an ingenious interweaving of all four voices.

The program intensifies with the contemplation of tragedy and grief embodied in Tower’s In Memory, followed by the reflective “Lyric” from George Walker’s first string quartet. Finishing the program will be Mendelssohn’s final String Quartet in F Major – a dramatic piece written as an homage to the memory of his beloved sister Fanny.

The quartet has performed in some of the world’s finest halls such as NYC’s Carnegie Hall and Lincoln Center and at chamber festivals around the world, including the Rockport Music Festival.