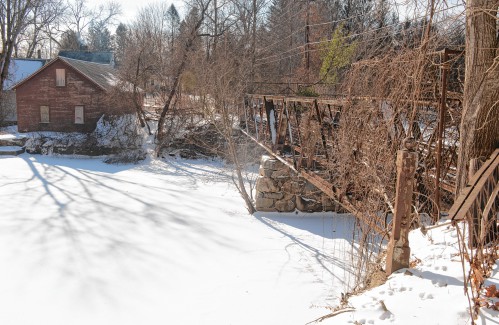 HATFIELD — Money needed to reconstruct a bridge that would take pedestrians across the Mill River, giving them a bird’s eye view of the dam and waterfall in the Mill-Prospect Street Historic District, will not be sought this spring.

The Select Board, with input from Community Preservation Committee Chairman Robert Wagner, agreed at its March 22 meeting to defer presenting $400,000 in potential spending to Town Meeting until 2023.

In part, board members said any decision on appropriating money for a project that could reopen the decades-old Prospect Court Bridge should wait until the fate of the D.F. Riley Grist Mill Dam is decided.

Wagner explained that the dam’s status is in flux after state officials, over the past year, have asked its owners to take down or repair the dam, at their expense.

“Perhaps it makes sense to just table this for a year, because apparently the state wants an answer from these owners in 2022,” Wagner said.

Wagner said if the dam is gone, it’s uncertain how residents would feel about paying for upgrades to a bridge where the rush of the water can no longer be experienced and the river habitat changes into a slower moving stream.

According to a spokeswoman for the Office of Dam Safety, the Department of Fish and Game’s Division of Ecological Restoration conducted a site reconnaissance preliminary evaluation in 2019 that has prompted the request that owners either improve the dam or take it out.

“If the dam were to be improved, that would be fantastic,” Wagner said. “This is an iconic visual contribution to the town of Hatfield.”

Situated next to the Old Mill Inn, the bridge has been closed for a number of years to both foot and vehicular traffic.

Wagner said Hatfield received a $185,000 grant several years ago that paid for an engineering analysis of the bridge that would be used toward its eventual reconstruction, and has spent about $42,000 to determine its structural integrity.

Select Board Chairwoman Diana Szynal spoke for the board in deferring the spending request.

“What we all want is for it to be a great project, and a great result, and there are some ducks we need to get in a row,” Szynal said.

How Jonathan Cheban Became The Foodgod: "I Have A Golden Palette"

Jobs up, unemployment rate down In April – Lowell Sun

Jobs up, unemployment rate down In April – Lowell Sun