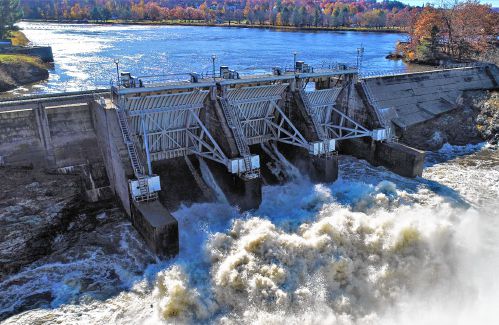 The plans, however, were met with opposition, including disapproval from the Connecticut River Conservancy, which declined to sign on.

In the time since the licenses for the Turners Falls Hydroelectric Project and the Northfield Mountain Pumped Storage Project each expired April 30, 2018, concerns have been raised about the environmental implications of the company’s relicensing.

Currently, the Massachusetts Division of Fisheries and Wildlife, Massachusetts Natural Heritage and Endangered Species Program, National Marine Fisheries Service, The Nature Conservancy and the U.S. Fish and Wildlife Service are negotiating a final settlement agreement, which they hope to be able to sign by June 30.

The parties are now negotiating “critical elements,” such as a tiger beetle mitigation plan, fish passage performance metrics and dampening the magnitude of the Great River Hydro Vernon Hydroelectric Project’s peaking releases below FirstLight’s Turners Falls Project, according to what is called an Agreement in Principle (AIP).

The three facilities up for relicensing through the Federal Energy Regulatory Commission — a hydro-pump facility at Northfield Mountain and two hydroelectric dams in Turners Falls — have been criticized for their impact on the river and surrounding environment. The Connecticut River Conservancy has said the dams have affected fish migration, and that the changes in river flow have impacted wildlife habitats and caused excessive erosion of the riverbanks. The Northfield Mountain hydro-pump storage facility has also been criticized for its impact on fish populations.

In their AIP, FirstLight outlined a set of “protection, mitigation and enhancement measures” that include efficiency and timing metrics, a barrier net to protect out-migrating fish, trashrack replacement, a bar rack, a plunge pool, a spillway lift, a rehabilitated gatehouse trapping facility, an eel passage and the retirement of the “Cabot ladder” and canal portions of the “Gatehouse ladder.” These measures fall short of acceptable, as argued by members of the Conservancy in a statement Friday.

“Other than the barrier net, the agreement does not address impacts from Northfield Mountain, and in fact it allows FirstLight to use a larger operating range in the upper reservoir and this will increase impacts,” said Andrea Donlon, the Connecticut River Conservancy’s river steward. “It also does not prevent FirstLight Power from dewatering parts of Barton Cove, as happened in the summer of 2021 when boats were stranded due their excessive pumping at Northfield Mountain. Summer, fall, and winter flows from the Turners Falls dam are also not enough to meet water quality standards and support aquatic life.”

“We are disappointed in the outcome of some of these negotiations and cannot support several critical elements. Even though we signed on to the recreation agreement, we cannot sign this document,” said Executive Director Andrew Fisk. “We support the changes in how water will flow through the turbines at Cabot generating station to improve river health below the power canal and the new releases of water to be spilled at the Turners Falls Dam during the fish migration season. However, the timeframes given to FirstLight Power to install fish passage projects and a barrier net at Northfield Mountain are lengthy and unnecessary.”

Fisk added that extensive timeframes enabled by the agreement are a money-saver for FirstLight.

“This agreement, if enacted in state and federal licenses, will mean that upstream fish passage at Turners Falls will not be completed until 2032, and that is unacceptable,” Fisk said in a statement. “The fish can’t wait that long.”

Despite criticisms from the Conservancy, FirstLight Head of Government Affairs and Communications Leonard Greene reiterated in a statement Thursday that the organization is satisfied with their collaboration with stakeholders.

“Although the parties have agreed not to comment publicly on the specific details of the proposals or the process by which we came to each AIP,” he wrote, “it is important to note that what has been filed with FERC is the result of significant collaboration with dozens of stakeholder organizations, and it encompasses many perspectives.”

The agreement’s details have prompted Fish and Aquatics Studies Team volunteer Karl Meyer, who has been involved in the relicensing process since 2012, to plan a protest at the Turners Falls-Gill Bridge for April 2 from 11 a.m. to 1 p.m. Attendees are being encouraged to bring a shoe box “painted or wrapped in black to represent the 20-plus miles of deadened Connecticut River ecosystem from the Vernon Dam at VT/NH, all way down past Turners Falls Dam,” according to an announcement about the protest.

“The Turners Falls bridge is sight of one of the most horrific cultural slaughters in colonial history — the 1676 Massacre at Peskeomscut, also known as the Turners Falls Massacre,” Meyer stated. “Here, at this deeply troubled historic place we will gather to give a voice to another grim, ongoing injustice — at a site where FirstLight’s Northfield control room operators directly run the dam below — and where the United States Fish and Wildlife Service contributes to the operation of the Massachusetts Division of Conservation and Recreation just opposite at the Great Falls Discovery Center.”

‘A game changer in Holocaust education’