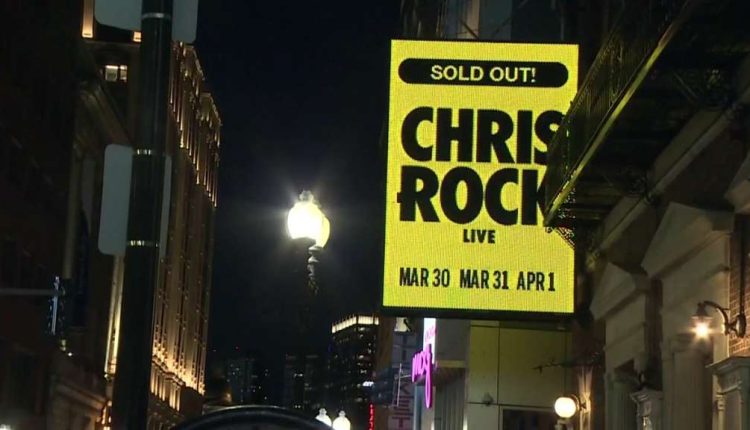 Chris Rock set to perform in front of sold-out crowds in Boston after Will Smith slapped him onstage at Academy Awards – Boston News, Weather, Sports

BOSTON (WHDH/AP) — Comedian Chris Rock is preparing to perform in front of six sold-out crowds in Boston after Will Smith slapped him onstage at the the 94th Academy Awards.

Rock will take the stage at the Wilbur Theater for a pair of shows on Wednesday, Thursday, and Friday amid fallout from an encounter with Smith that stunned a crowd that had gathered for the Oscars, as well as viewers at home.

Smith shocked onlookers when he took the stage during Rock’s remarks after the comedian made a joke about Jada Pinkett Smith, Smith’s wife. Rock said, “Jada, I love you. ‘G.I. Jane 2,’ can’t wait to see it.”

The joke touched a nerve. Pinkett Smith, whose head is shaved, has spoken publicly about her alopecia diagnosis. Smith strode on stage and slapped Rock across the face. Back in his seat, Smith twice shouted for Rock to “get my wife’s name out your (expletive) mouth.”

The resale price for tickets to Rock’s shows have skyrocketed in the days following the incident with Smith.

The cheapest ticked for Wednesday’s 7:30 p.m. show is going for $712 on StubHub. In a tweet, ticket sales website TickPick said, “We sold more tickets to see Chris Rock overnight than we did in the past month combined.”

Those who managed to score a ticket to one of the shows will not be allowed to use their phone while Rock performs. Anyone who is caught with a phone out will be asked to leave the theater.

Smith has since issued an apology to the comedian, the academy and viewers at home, saying he was “out of line” and that his actions are “not indicative of the man I want to be.”

“Violence in all of its forms is poisonous and destructive,” said Smith. “My behavior at last night’s Academy Awards was unacceptable and inexcusable. Jokes at my expense are a part of the job, but a joke about Jada’s medical condition was too much for me to bear and I reacted emotionally. I would like to publicly apologize to you, Chris. I was out of line and I was wrong. I am embarrassed and my actions were not indicative of the man I want to be. There is no place for violence in a world of love and kindness.”

Fans of Rock are now wondering if he will address the Oscars incident while in Boston.

(Copyright (c) 2022 Sunbeam Television. The Associated Press contributed to this report. All Rights Reserved. This material may not be published, broadcast, rewritten, or redistributed.)

What to know about the autoimmune disorder alopecia

How to Make the Grammy's Signature Martini-Inspired Cocktail