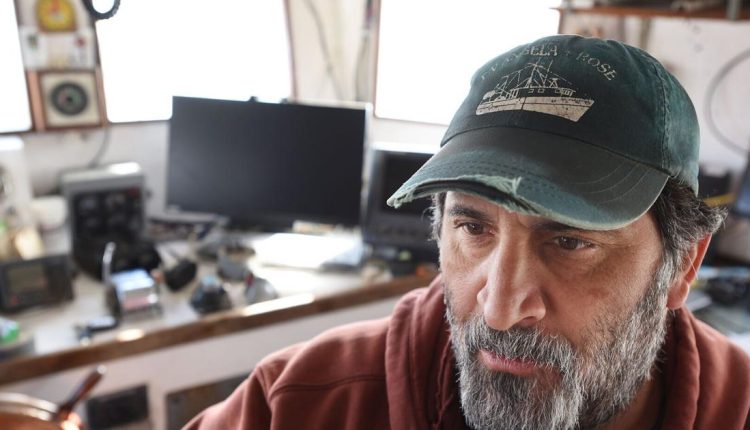 CODA’s big wins at the 94th Academy Awards Sunday night was not only a win for the deaf community, it was also a win for the nation’s oldest seaport in its portrayal of the fishing industry and its families.

“CODA” revolves around a fictional Gloucester fishing family whose three out of four members are deaf. The family’s hearing daughter, Ruby, serves as their translator. She must drag herself out of bed at 3 a.m. to help the family make ends meet dragging for groundfish.

“That is the one word that comes up again and again is the ‘authenticity’ of it,” said Gloucester Mayor Greg Verga the day after CODA won three Academy Awards Sunday night, including for Best Picture.

CODA did not turn to special effects to tell the story on the water. Instead, it turned Capt. Paul Vitale’s 50-foot fishing vessel Angela + Rose into a working movie set in August and September of 2019.

“I’m so psyched for them to win all three Oscars last night,” Vitale said. It was a surprise, but he credited the cast and crew for making it happen. “On the boat, they worked real hard.”

On board Monday morning, asked if he planned to offer CODA tours, Vitale motioned to his crowded deck, including a large fish cutting machine, and said: “Where am I going to put them?”

“When they filmed, these two machines weren’t on the boat. I didn’t have them at that point,” he said. For the movie he had to take equipment off to make room for the movie crew.

“I fish alone, so then all of a sudden you got all these people on the boat, and you are confused and like ‘oh my God,’” he said.

Vitale said he appreciated the way fishing was portrayed in the movie, including the tense interaction between at-sea monitors required by federal regulators and the crew.

In Gloucester, all the boats are family-owned, Vitale said, “from the biggest dragger in town to the smallest lobster boat. It’s all family-owned in this town.”

“I want to say quickly, a shout-out to Gloucester, Massachusetts,” said writer/director Sian Heder in an ABC interview carried on YouTube after the Oscars. “I want to thank all of the fishermen there. The whole community, Paul Vitale, your boat … The whole marine crew for taking us to see the city of Gloucester and all of the people there who welcomed us and made us just as much a part of that community and taught us what we needed to know, taught us to fish.”

Best Supporting Actor Troy Kotsur, the first deaf man to win an Academy Award for acting, also gave a shout out to the fishermen of Gloucester in his acceptance speech, signing: “Hey, Popeyes, don’t forget to eat your spinach.”

“They are definitely the little film that could,” said Meg Jarrett, of Gloucester, the liaison for Cape Ann for the Massachusetts Film Office, who spoke about the importance of CODA’s success, saying it will make it easier to film other productions on Cape Ann.

She said the fact that Heder spent summers in Gloucester growing up means this wasn’t just a film using the seaport as a backdrop.

“This was her love letter to Gloucester,” Jarrett said. “She did a great job.”

This is certainly not the first film or TV show to be shot in Gloucester. The 2000 film, “The Perfect Storm” was shot here, and so is the “Wicked Tuna” TV series. But those interviewed see CODA’s success as a plus for the city’s fishing community.

“It’s wonderful,” said Angela Sanfilippo, the president of the nonprofit Gloucester Fishermen’s Wives Association, about “CODA’s” Oscar triumphs. “It tells the story of Gloucester, its citizens, the fishing industry.”

The story in CODA of the oldest daughter having to make the choice to stay or go is also one many immigrant families must face. Gloucester is a city of many Portuguese, Italian and Sicilian immigrants, and Sanfilippo said this was a choice she had to make growing up, as she stayed with her family to serve as an English-language translator. She said many families in town saw themselves in the movie.

It was the Gloucester Fishermen’s Wives Association that connected Vitale’s fishing vessel to the movie. She said Vitale did a good job teaching them about fishing.

“For them to remember us on a night like last night was unbelievable,” Sanfilippo said.

“I was ecstatic that they used Paul’s boat,” said Sefatia Romeo Theken, Gloucester’s mayor at the time CODA was shot. Romeo Theken, the vice president of the Gloucester Fishermen’s Wives Association, also liked that the film spoke about the numerous regulations fishermen have to live with, such has having at-sea monitors on vessels.

“This is reality,” she said.

She was thankful for Kotsur’s shout-out to fishermen in accepting his Oscar, but she said he also captured what it was like to fish.

“He felt what the fishermen were feeling,” Romeo Theken said.

“It’s very exciting that it happened, the movie itself happened,” said Mayor Verga. Compounding things exponentially, “it won,” he said.

In making a comparison to the 2000 movie “The Perfect Storm,” the mayor said that movie was “more of a gritty look at Gloucester of the fishing industry.”

“One of the big things about ‘The Perfect Storm’ was it was an action movie,” said Verga, with the storm playing a major role. But he said he doesn’t want to take anything away from the family and friends who lost loved ones when the crew of the Andrea Gail perished in 1991, and he thought Sebastian Junger’s story was great. He also spoke about the appeal of “Wicked Tuna” and its draw.

However, Verga said, CODA was more reflective of Gloucester’s fishing industry, and the plight Gloucester fishermen and women face in trying to make ends meet, including the “800-pound gorilla” of dealing with catch limits or monitors on board.

“It’s another seagull feather in the cap,” Verga said of CODA’s success.

Jarrett acts as a go-between for production companies and Cape Ann communities. She helps scout locations, find production space, or helps in other capacities. She has decades of film production experience, and she also works on productions.

She gave an example of how one local film production can help another. For example, the Netflix movie “Hubie Halloween,” which Jarrett said had a much larger budget than “CODA’s,” was shooting a scene in Salem that required hip waders. “Hubie” was being shot on the North Shore at about the same time as “CODA.”

Jarrett suggested the “Hubie” crew go to Nelson’s in Gloucester, and the production assistant purchased about $2,000 of hip waders for the crew. The waders were barely used, and so Jarrett then suggested CODA could purchase them in a form of production-to-production help.

This Will Not Last Forever