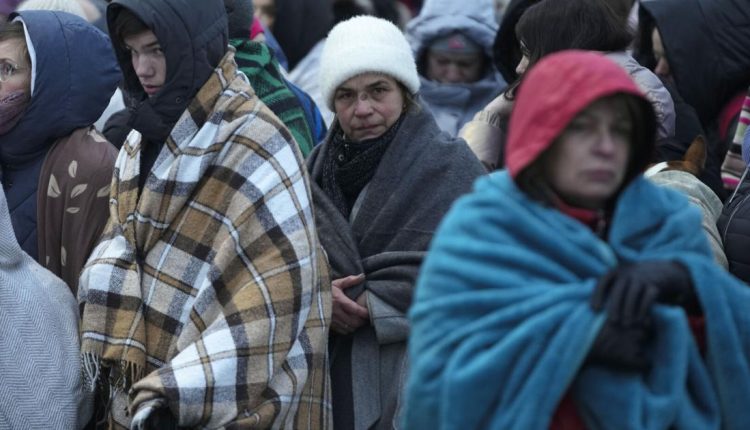 MEDYKA, Poland (AP) — The number of people who have fled Ukraine since Russian troops invaded has surpassed 4 million, the United Nations reported Wednesday as shelling continued in places where Moscow had vowed to ease its military operations.

“I do not know if we can still believe the Russians,” refugee Nikolay Nazarov, 23, said as he crossed Ukraine’s border into Poland with his wheelchair-bound father.

Despite Russia’s announcement during talks on Tuesday that its forces would ease their assault near Ukraine’s capital, Kyiv, and elsewhere, Nazarov said he expects “more escalation” in the country’s east, including the city he and his father fled.

“That is why we cannot go back to Kharkiv,” he said. “We are afraid of a new phase of war in eastern Ukraine.”

Nazarov, like others interviewed by The Associated Press at the Polish border with Ukraine, echoed the opinion of Ukrainian President Volodymyr Zelenskyy. In his nightly video address, Zelenskyy said that given what was happening on the ground, there was no reason to believe Russia’s statement about reducing military activity near Kyiv and in Chernihiv, a besieged northern city.

“We can call those signals that we hear at the negotiations positive,” Zelenskyy said in his address to the Ukrainian people. “But those signals don’t silence the explosions of Russian shells.”

Olha Kovalyova, who arrived in Poland with her two children, said she didn’t trust Moscow because it had failed to fulfill earlier promises made in the framework of 2014 and 2015 agreements aimed at ending fighting between Russia-backed separatists and Ukrainian forces in the eastern Donbas region.

“The Minsk agreement is not working, so how can we call it peace talks if they are shooting and bombing our cites during and after the talks?” Kovalyova said. “There is no trust in Russia, but also I hope for peace and calm, but unfortunately this is the situation.”

The U.N. refugee agency said Wednesday that more than 4 million people have left Ukraine since Russia launched its invasion on Feb. 24 and sparked Europe’s largest refugee crisis since World War II. That number exceeds the worst-case predictions made at the start of the war.

“I think it’s a tragic milestone,” Alex Mundt, the UNHCR senior emergency coordinator in Poland, said. “It means that in less than a month or in just about a month, 4 million people have been uprooted from their homes, from their families, their communities, in what is the fastest exodus of refugees moving in recent history.”

More than 2.3 million refugees from Ukraine entered Poland, but some have since traveled on to other countries. A small number have returned to Ukraine, either to help in the defense against the Russians or to care for relatives.

More than 608,000 refugees have entered Romania, over 387,000 have gone to Moldova, and about 364,000 have entered Hungary in the last five weeks, UNHCR said, based on counts provided by the governments of those countries.

“Refugees from Ukraine are now 4 million, five weeks after the start of the Russian attack,” U.N. High Commissioner for Refugees Filippo Grandi tweeted Wednesday as he crossed into Ukraine.

Grandi said he would be in the western city of Lviv and discuss ways to increase support “to people affected and displaced by this senseless war.”

UNHCR teams and their partners have been working to deliver protection, emergency shelter, cash assistance, core relief items and other critical services for refugees.

UNHCR projected from the onset that about 4 million people might flee Ukraine and said it was regularly reassessing its forecasts.

Aid workers say the number of people fleeing eased in recent days as many residents awaited indications of the direction the invasion might take. The U.N. estimates the war also has displaced 6.5 million people within the country.

The International Organization for Migration, which tracks not just refugees but all people on the move from their homes, reported earlier this month that more than 12 million people are estimated to be stranded in areas of Ukraine under attack or cannot leave because of security risks, the destruction of bridges and roads and a lack of information about safe destinations and lodging.

All told, more than 22 million people are either blocked from moving or have been forced to flee, IOM figures show.

Jamey Keaten reported from Geneva. Vanessa Gera in Warsaw, and Srdjan Nedeljkovic in Medyka, contributed to this report.