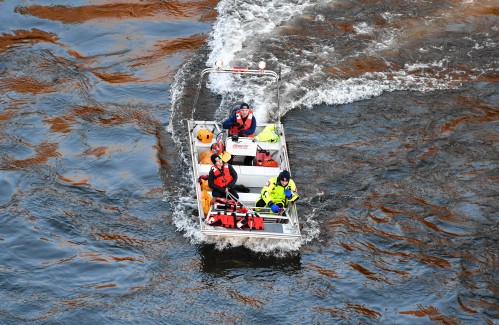 GILL – State and local police and fire personnel were called to the French King Bridge Tuesday evening to search for a person who reportedly jumped off the bridge.

Sgt. Jason R. Bassett declined to comment on the the ongoing investigation, but confirmed there was a witness. He referred further questions to Massachusetts State Police, who he said was leading the investigation, assisted by the Gill and Erving police departments.

“They notified us, and we were called to the bridge” said State Police Officer Christopher Lapointe, after conducting a search of a silver Hyundai Elantra parked by the bridge.

Lapointe also indicated the investigation was ongoing and state police would be working primarily with Gill Police Department.

Greenfield Police also responded to the bridge with its new command post, where it housed a monitoring station for the drone that was used to scan the river.

The Northfield Dive Team was also called in to assist, but due high river flow was unable to carry out dive operations, according to Northfield Fire Chief Floyd “Skip” Dunnell III.

“We assisted a bit in the surface (search),” he said, adding that 11 of his divers were called to the scene.

Dunnell explained that prior to dive operations, the water is tested from Northfield Mountain Pumped Hydrostorage Station. On Tuesday evening, the water was flowing at about 20- to 26,000 cubic feet per second.

“We can dive at that location at about 8,000 CSF, so that’s actually 2 ½ times stronger and faster than is diveable,” he said. “Unfortunately, it’s a determining factor.”

First responders were last called to the French King Bridge on Feb. 23 for a report of an individual who jumped off the bridge.