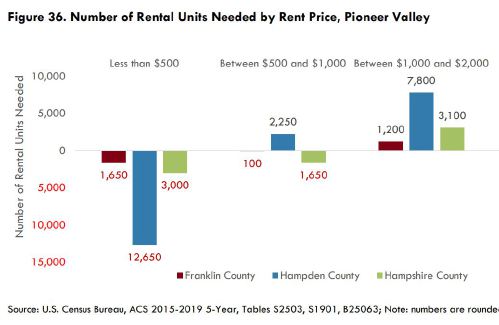 The Recorder – Report: Area rental housing further out of reach for many

Housing affordability and segregation represent a serious problem in the Pioneer Valley, where the COVID-19 pandemic and a hot market have contributed to increasing housing inaccessibility.

Those are some of the findings of a new study published by the UMass Donahue Institute’s Economic & Public Policy Research Group, which found that the region needs at least 17,000 more rental units at or below $500 a month. Housing affordability was already an issue before the pandemic, which led to a spike in prices across the Valley, the report found. Comparing available rental units and incomes to determine “housing income mismatch,” the report concludes that “much of the region’s rental housing is out of reach for residents.”

The report, prepared for the housing and employment services organization Way Finders, focused on the greater Springfield area. It was the second regional housing report the group has released within the past year.

“Often I think our region is thought of being a very affordable place compared to other parts of the  state,” said Keith Fairey, the president and CEO of Way Finders, which raised funds for the report and was part of the advisory group behind it. However, income for renters — and particularly renters of color — has been stagnant, he added. “We’re not producing enough affordable housing and we’re not producing enough housing overall.”

While rental and home prices tend to be lower in the Pioneer Valley than elsewhere in the state, so too are salaries and wages. As a result, the housing cost burden is actually higher in the region, the report says. The report also concluded that segregation of white and Hispanic communities in the region is “among the highest in the nation,” with housing costs, deficits and regulations reinforcing that segregation.

The COVID-19 pandemic worsened the situation, creating widespread hardship — such as a loss of income and unemployment — that disproportionately affected women and people of color in the region and contributed to housing uncertainty.

“Going forward, emergency rental assistance could be instrumental to ensuring housing stability for the thousands of households in the Pioneer Valley that have applied for assistance, protecting them from eviction and possible homelessness as landlords have begun to file and execute evictions,” the study says. “Furthermore, early data on migration suggest that the more rural parts of the Pioneer Valley have attracted movers — a departure from recent trends — possibly due to the rise of telework and fear of exposure to COVID.”

The researchers found that Hampshire County needs more than 1,500 additional rental units at or below $1,000 a month and that Franklin County needs 100 more of those units. In total, the Pioneer Valley needs around 20,000 more housing units in total, including single-family homes, the report says.

“These tangible targets are possible with federal and state funds flowing into the Pioneer Valley to help with recovery,” the report concludes. “If we can build the necessary housing stock, prosperity can increase across our communities. Municipalities and middle-income families will benefit from a more attainable housing market with increasing opportunity for everyone.”

The researchers say that maintaining building conditions is critical in high-poverty areas, where deteriorating housing stock can lead to the loss of units. Keeping struggling owners in their homes and creating more housing stock are also mentioned as necessary approaches.

“Ultimately, thoughtful rural and urban development needs further political and monetary support to match demand and create possibilities where they are currently arising too slowly to cope with the natural growth and upkeep of our region,” the report says.

Fairey said that in total, his organization has distributed some $90 million in housing assistance over the past two fiscal years, dealing with “unprecedented need” during the pandemic. But that only deals with the immediate needs in the region, and the money goes not directly into the pockets of residents but to landlords. The region needs to work collaboratively to address long term needs, he said.

“Housing markets are regional, they don’t stop at the Springfield line or the Amherst line,” he said. “We need to come up with regional approaches and set real goals for ourselves about what’s needed.”

Housing needs have implications on the broader economy, Fairey said. He said that he spoke to somebody who works in economic development locally who said that a business wanted to locate in the region but was hesitant after hearing that there may not be enough housing for its employees.

“That goes beyond what a lot of people think about when they think about housing,” he said. “This impacts our region’s economy.”

The 8 Best Sustainable Makeup Brands That Are Actually Worth Buying