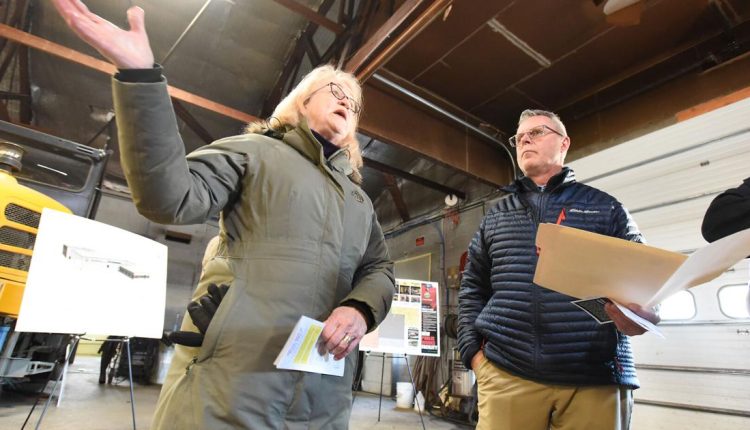 ROCKPORT — For $5 million, Rockport residents can choose to have a new Public Works facility or have the department’s employees continue to work in squalor for the next 10 years.

This is the argument being made by the DPW Facility Building Committee ahead of Saturday’s Town Meeting. Labor and material costs have skyrocketed since the new DPW facility project was approved in 2019 at a cost of $12.4 million. The current price tag is $17.4 million.

Town Meeting will be held April 2, at 9 a.m., in the Rockport High School gymnasium, 24 Jerden’s Lane.

In 2019, voters agreed to pay for the facility via a tax-limiting Proposition 2 1/2 debt exclusion. Property taxes would have increased by 46 cents per $1,000 worth of assessed value before slowly decreasing each year. If the town closes the $5 million funding gap this year, that initial increase would be 55 cents.

On Tuesday, Public Works staff, and DPW Building Committee members and selectmen invited the Times to tour the aging facility. It hasn’t changed much since the new DPW facility project was approved in 2019. There is still no fire control system, no place to properly store the toxic chemicals on site, no proper ventilation system and no additional space to properly store the department’s costly vehicles and equipment.

What is new is mechanic Steve Drillis, who was hired in January. Previously, the town would have to send out its public works, police and fire vehicles for service. Work on Public Works’ vehicles alone cost the town between $75,000 and $90,000 annually.

The same month Drillis was hired, Public Works purchased four mobile vehicle lifts. Problem is, the scaffolding in the current Public Works facility restricts how high Drillis can lift the vehicles. Larger vehicles, such as fire trucks, only can get a couple of feet off the ground.

A mechanic all his life, Drillis said he’s working in some of the worst conditions he’s ever experienced.

“I have to crouch underneath,” he explained. “At this (lifted) height, we call them backbreakers. This building is really holding me back.”

The town’s fiscal year budget, also to be approved at Town Meeting, will include money for Public Works to hire a second mechanic.

Public Works Director Gary LeBlanc noted the vehicles themselves are deteriorating far faster than expected. The facility doesn’t have a proper washing bay or drainage capabilities. Instead, workers wash the salt and grime off the vehicles with a pressured water hose. It’s not enough; according to LeBlanc, the fleet of Freightliner trucks purchased in 2017 are already showing rust.

These days, not many workers work inside the Public Works facility due to safety concerns; only Drillis spends the majority of his day in the bay. Maintenance foreman Greg Abbott’s woodshop is also inside. The crew and supervisors either post up in the Forest Fire offices or the two trailers behind it, which cost $18,000 a year to rent. There are no locker rooms on site for workers.

The Forest Fire office, trailers and main facility are primarily heated with propane. LeBlanc said the department has spent $10,000 on propane tanks over the past four months. DPW Facility Building Committee Vice Chairwoman Monica Lawton said heating costs for the proposed new facility would be half that amount.

It would cost the town $5 million just to keep the current operation going for another 10 years, Selectman Ross Brackett said.

Lawton said the committee is not compromising on its plans to get the Public Works project fully funded.

“All other options are so unattractive that we can’t consider it,” Lawton explained. “It would be tremendously costly if we only did one small piece of it at a time. Construction prices always go up. It make sense to do it now to get it over with.”

the warrant can be cut

Michael Cronin may be contacted at 978-675-2708, or mcronin@gloucestertimes.com.