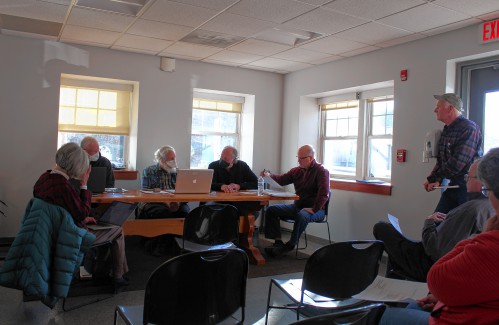 COLRAIN – Approval for “Spruce It Up Colrain,” a proposed community-wide cleanup event, was tabled for the second week in a row as the Selectboard seeks written plans before allowing the transfer station to be used as a site for the cleanup.

At the end of last week’s meeting, event organizer Jonathan Lagreze was asked by the Selectboard to present a ruling from the state Ethics Commission and a written plan for the event before the Selectboard granted full approval. Lagreze was the town’s representative for the Franklin County Solid Waste Management District, which raised ethics concerns over solicitation of donation pledges for a planned “pay-it-forward tire disposal drive.”

“I have some serious concerns and continue to as to why we don’t have anything in writing from the Ethics Commission,” said Selectboard member Michael Slowinski. “You have not answered that and apparently refuse to give us what we requested … we need details Jonathan, and they aren’t forthcoming.”

“Spruce It Up Colrain” is a community event pitched by Lagreze and other volunteers that would allow for free disposal of litter, fee-free bulky waste collections and tire disposal for Colrain residents. The event would be held at the Colrain Transfer Station on April 23, April 30, May 3 and May 7 in celebration of Earth Day and keeping the community free of litter and waste.

Lagreze said last week that he had received donation pledges, but no money has changed hands. He noted Tuesday night that he spoke to the Ethics Commission by phone, but did not receive a written opinion because that could take up to 30 days.

Earlier this week, Lagreze submitted a letter of resignation to the Solid Waste Management District, which was approved by the Selectboard Tuesday night. The Selectboard, however, said they still had some concerns, which were voiced by Thom Griffin.

“Hold off on the tire disposal,” Griffin said, “because you were a town employee when you started the whole thing.”

“I still have the same reservations as Thom,” Slowisnki said. “It’s not what’s happening going forward; it’s what happened in the past and it taints the tires.”

“Mike, can you come up with a list of requirements that must be done to have a tire collection? Compare that to Jonathan’s plan in writing and see if we can come to an agreement,” Kurland said. “At this point, we have expressed our interest in seeing these things happening, as long as they are happening the right way.”

Kurland also suggested that one way Lagreze could avoid any sort of ethics concerns with the tire disposal would be to create a private community fund, which would still allow money to go to people without it ever being in possession of the town.

The Selectboard again requested a written plan from Lagreze and Highway Superintendent Scott Sullivan that details how the transfer station would be used and what the roles of event volunteers would be.

“We need to know exactly what tasks are being performed,” Kurland said, adding they would be happy to approve the event “as long as we have the written plan and we have it clear on how money is handled.”

The Selectboard is scheduled to meet again on April 12 at 4:30 p.m. in Colrain Highway Garage.