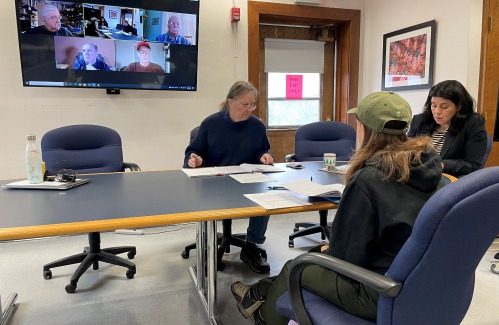 The Recorder – Demo-delay bylaw aired at public hearing in Montague

MONTAGUE — The Historical Commission held a lightly-attended public hearing on a proposed demolition delay bylaw Thursday, during which member Christopher Sawyer-Lauçanno reiterated a hesitance to alter the draft.

The hearing followed a special Historical Commission meeting Monday intended to “make sure (commissioners) are speaking relatively and with consensus” prior to the hearing, according to Chair David Brule. The bylaw had been derived from the Massachusetts Historical Commission’s language and was later vetted by town counsel, a process Sawyer-Lauçanno advised against having to go through again if the bylaw’s wording is changed.

“We are pretty much boxed into … a certain kind of language,” he said.

The demolition delay bylaw, which has been instituted throughout 160 Massachusetts communities, is intended to “preserve and protect, through advance notice of their proposed demolition, significant buildings,” as written in the draft bylaw. The draft states this would “encourage owners of preferably preserved significant buildings to seek out persons who might be willing to purchase and to preserve, rehabilitate or restore such buildings rather than demolish them.”

“Essentially,” Sawyer-Lauçanno said, “the history of the enactment of bylaws of this sort goes back to the willy-nilly destruction of historic downtowns.”

“Government should do things that are necessary and not do things just because it can,” resident Mike Naughton argued. “I’m struggling to think of an example of when having this bylaw in place would have been helpful.”

Lilith Wolinsky, a resident who has consistently advocated for the Farren Care Center’s preservation at town meetings, argued that such bylaws are crucial tools in preserving the “character” of New England communities.

“It may or may not impact the Farren,” she said, “but Montague has many historic buildings throughout the villages with no protections on them.”

Naughton suggested that the bylaw, if instituted, should be amended to account for a better-specified list of buildings that would qualify under its protection. Wolinsky argued otherwise, advocating for a swift adoption so that more buildings could be protected in time.

Previously, Sawyer-Lauçanno said a bylaw implemented in Montague would likely not come in time to apply to the vacant Farren Care Center on Montague City Road. The bylaw, which must be approved at Town Meeting, would go into effect after the period in which parent company Trinity Health of New England could request a demolition permit from the building inspector.

“I would not particularly like to see it changed at this point in time,” Wolinsky said of the proposed bylaw’s language. “I think we need to move forward with this.”