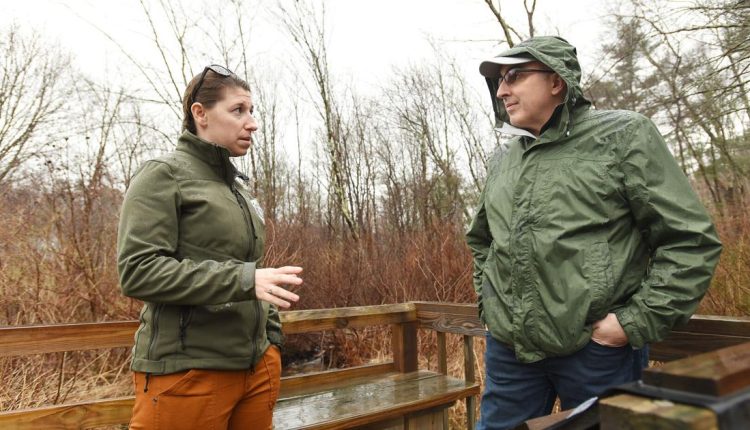 The start of the annual Little River herring census on Friday took place on a day only an alewife would love.

As it started to rain around 9 a.m., officials, including Mayor Greg Verga, gathered at the West Gloucester fishway behind the Little River Water Treatment Plant at Magnolia and Essex avenues to hear about this year’s herring counting efforts from the city’s deputy shellfish constable and alewife warden, Rebecca Visnick.

The herring counts actually count on volunteers to observe the fish as they move from the natural fish ladder into a small upstream pool. It’s a part of a larger journey as the river herring or alewives travel from the Atlantic Ocean to Lily Pond to spawn.

Visnick explained the fishway was restored in 2016 under the auspices of retired shellfish constable and volunteer herring counter Dave Sargent. What looked like a square, concrete tube was removed and the fishway was redone to make the channel more natural, Visnick said.

“There’s step pools that go all the way from Little River on other side of the road, which is salty,” Visnick said. This river stretch is a mix of salt and freshwater.

“And as the herring move up this way, it goes all the way up Laurel Street to Lily Pond, and then up further to the pond above that,” Visnick said. “So, fish should start moving up any time. They are moving down the Cape right now. Hopefully they come up this way, but with our cold snap last week, they might be delayed a couple days. Hopefully, it warms up for them soon.”

She noted juvenile eels are moving upstream where they will grow to be adults before they head back to the Sargasso Sea.

“So, we have adult herring coming up to spawn in the pond and we have baby eels coming up to grow up to adults, so a little bit of both,” Visnick said.

Counters can make their 10-minute observations from a wooden platform located along the fishway at the back of the water treatment plant.

She noted there is a natural separation in the fishway, marked by a metal pole with a thermometer. Herring are counted only when they move from the lower pond up into the slower running water; in that way the herring are not counted again by an observer who comes later.

Data sheets are available in a cubby at the observation deck. Observers can also scan a QR code on their phones and enter data in an online form.

Visnick said the low count was due in part because the run was redone not too long previously, and there is not a lot of overhead coverage from small trees to hide herring from predator such as osprey. She suspects the herring are moving at night.

The low number compares with 2017, when counters observed 3,300 herring. Eleven were counted in 2019 and five were tallied in 2020, when the COVID-19 pandemic disrupted counts by reducing slots when counters could make observations.

Eric Hutchins, a habitat restoration biologist with the National Marine Fisheries Service and a Rockport resident, said he has been working with Sargent, Visnick and Shellfish Constable Peter Seminars for years on this herring count.

“One thing I wanted to mention, this is the longest volunteer fish count in the Commonwealth of Massachusetts,” Hutchins said. “Which is fantastic,” he said of the 22-year count. He urged Visnick not to install an electronic fish counter, which officials estimated could cost $10,000.

“I don’t think you should ever put an electronic fish counter here,” Hutchins said. “Because having the public come here is half, if not nine-tenths of the value.” It’s a safe location to park, and Hutchins noted an Eagle Scout built the platform for his project.

The two-month herring count runs from April 1 to end of May. For more information, you may email Visnick at rvisnick@gloucester-ma-gov.