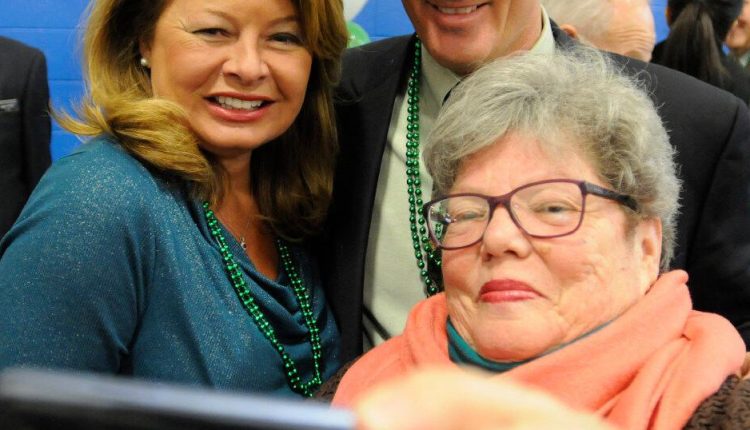 Scott Brown, former U.S. Senator from Massachusetts and U.S. Ambassador to New Zealand, finds himself in an odd spot these days — he’s not center stage in the political spotlight.

He’s stepped aside for now, not for good, but aside to support his wife, Gail Huff Brown, and her bid to win a Republican primary for New Hampshire’s U.S. House’s First District seat held by Democrat Chris Pappas.

There wasn’t a moment of hesitation, he said.

Brown said his wife, a longtime television reporter, is well qualified to represent the people of New Hampshire with a long work history, lots of life experiences, most recently serving as president of the Diplomatic Spouses’ Association, traveling the world, meeting world leaders and participating in important discussions.

Brown described the other candidates as “political operatives.”

“She has a rock-solid change of winning” the primary and facing Pappas in the Nov. 8 general election in the district that represents Derry, Londonderry, Plaistow and all of the seacoast, including Seabrook and Hampton Beach.

“I’m focusing on the mid-terms quite honestly, because of the need for checks and balances for the out-of-control administration that’s in there now. It’s dangerous, what they’re doing, or not doing, at the border, the overspending, what they’re doing to not curb inflation, the poor foreign policy decisions, Afghanistan, now Ukraine and Putin. You can’t make this up.”

In fact, he said, it was President Joe Biden’s actions that led Gail Brown to throw her hat in the ring.

“After Afghanistan and the debacle there, she was so upset. She said, ‘I’m done complaining, I’m going to get involved,’ and she’s been running now for months,” he said. “I think we do need to take back the House and the Senate. It’d be nice to have a check and balance on what’s going on now. It’s out of control. Respectfully, I want Joe Biden to do well, he’s the president, but he’s not doing well and it’s really affecting our safety and our security.”

Although he’s deferring any political ambitions for now, Brown said he will be helping out on both sides of the state line when he’s called on.

A recent weekend found him on Cape Cod, stumping at a fundraiser for a GOP candidate who had supported his campaigns in the past. Don’t be surprised if he shows up at the Massachusetts’ GOP convention in Springfield in May.

Although he grew up in the Boston area, served on Beacon Hill at the Statehouse and spent three years as a U.S. Senator after Ted Kennedy’s death, Brown said he’s happy to be living and loving life as a resident of Rye.

Is the 62-year-old tempted to pack his bags and move back to run for, say, Massachusetts’ governor?

Any advice for GOP candidates and state party officials?

“I believe and I hope that we’re the party of Lincoln, where we can find a big tent for everybody because we don’t all agree. When you compare us to what the Democrats are doing, listen, they just want to you vote, they don’t care if you’re liberal or conservative, gay, straight, rich, poor, happy or sad. They just want you to get out and vote for the person they want.”

It seems the state’s GOP has a hard time including Republicans and voters of all stripes, he said.

“We kind of have a problem finding a way to coalesce when it matters. That’s the only advice…you have to find a way to balance.”

The key is attracting those “unenrolled” voters in the state, which outnumber both the Republican and Democratic registered voters combined. According to Secretary of State William Galvin’s office, in February 2021, there were 2.7 million “unenrolled” voters, compared to 1.49 million Democrats and 494,000 Republicans.

Massachusetts has so many “unenrolled” voters, Brown explained, because they want to be able to vote both ways. “They don’t want to be in one (party). I feel they are kind of frustrated with both parties, by the far left and the far right. It’s not where a lot of people want to be. Some people may be fiscal conservatives and national security hawks but they may also be social liberals. So where do they fit in?”

Brown hadn’t been back in the States from his tour of duty in New Zealand but two weeks when the nation’s Capitol was stormed on Jan. 6.

“It was kind of surreal that something like that would happen in our country,” he said. “I knew every inch of that building, knew a lot of the senators and congress people and I thought it was wrong.”

Brown said there’s nothing wrong with protesting. “But to take it (further) and go in, what some people did, and really destroy property and go into ‘The People’s House,’ in such a manner. I thought was below us and made us look like a third-world country.”

Defendants, however, are entitled to due process, he said.

“We’re a nation of laws and they broke the law. I don’t know the individual cases, respectfully, I haven’t been following it that closely in great detail, but they are entitled to counsel, a fair trial but you know there are consequences for breaking the law,” he said.

“Do I wish it had never happened? Absolutely. Are there extenuating circumstances where some people who don’t have any criminal record are now potentially serving jail time? I think those living a life of good will and good public service should be taken into account as part of their sentencing just as it is in our everyday situations,” said Brown.

Was Trump at fault?

“I don’t think it’s one person’s fault. To divide a country, it takes more than one person,” he said. “I know in the part of the world I was in, whenever I needed his (Trump’s) help, he was there. An example was the Christchurch terror attack, within minutes, I was on the phone with him, and was getting what I needed to make sure this didn’t have a second wave, or a third wave. Whatever we needed to find out ‘who, what, where.’”

It was the same story on the U.S.-New Zealand trade agreement, he said. “He got it done early and really pushed it hard. Every time I dealt with him on the needs for my job, it was delivered, but being outside the country for four years, I was kind of out of the loop in terms of the every day machinations of what was happening back here. “

Brown said he believes everyone one has a right to free speech — from protestors in the streets, to outspoken GOP members like Liz Cheney and Adam Kinzinger, to the former president.

“We’re a country that values free speech whether people are on TV or speaking their minds. They have the right to speak their mind and if people don’t like it, they can vote them out of office or they can change the channel,” he said.

“What I don’t like is you have President Trump being censored, taken off media platforms and you have Putin and all his cronies, and all the terrorist leaders around the world and they have the mouthpiece,” said Brown. “Putin, if I’m not mistaken, is still on Twitter and Facebook and other social media platforms. Are you kidding me? It’s just wrong. If you don’t like what someone’s saying, just change the channel or unfriend them.”

As Americans, Brown said, there is something that binds us together, regardless of political affiliation.

“I’ve always said we’re Americans first,” he said. “What you saw the other day, and after 9/11 for that matter, when all these U.S. senators and congressmen were on the Capitol steps together on Ukraine. Everyone standing together, I believe, that’s the very fabric of our country. While we have challenges, we have a very, very strong social fabric.”

Poll: Even with risk of war, Americans want more support for Ukraine | News